How Boulder Handled its Asian Immigrants

Huge buzz is going around about John Hickenlooper’s declaration that Colorado will openly become a foster home to Syrian refugees. Tens of thousands of people could enter the US as they flee the recent escalation of violence against civilians perpetrated by ISIS. Many agree with this policy of open borders, and many detest it, but today will simply be an observation of how Boulder, CO has handled, and continues to handle, its immigrant population. Speculations about the future of Boulder‘s foreign policies are left to our readers.

Boulder, as almost anyone in the state could tell you, is predominantly “white”. There are over 85,000 people in the city who identify as white; 88% of the total population. Compare this to Latinos at 8%; over 8,000 people, and Asians at 4%; over 4,000 people. This supreme lack of racial diversity could easily spell disaster if local legislature decided to enact policies and laws to oppress the minority of non-white citizens. But this has never been the case before. Boulder tends to be historically uninterested in racism.

Boulder‘s Asian population is interesting because many of those identified as Asian are from Nepal and the surrounding countries near the Himalayas. This is due to the influence of Buddhism here, begun by Chogyam Trungpa Rinpoche and the establishment of Naropa University in the 1970s. This attracted both white and Asian followers of Chogyam Trungpa Rinpoche to Boulder. The city maintains a healthy, but relatively small population of Eastern immigrants and their families to this day. 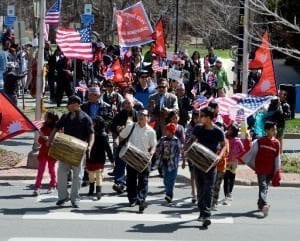 y year since 2004, Boulder has allowed its Nepali population a Sunday in April to celebrate their New Year. Hundreds of Nepali people dress in traditional garb and drum their way down the street, waving both Nepali and American flags. In 2008 the US government began resettling refugees from Bhutan, a neighbor of Tibet and Nepal, and many were sent to Boulder. The number of Nepalese people in Boulder today is over 2,700. These refugees fled the violence enacted in Tibet by China, and there was no suspicion harbored toward these people. They worked quietly alongside all other Boulder residents without issue, and paid their taxes here which helps fund education and public services for all Boulderites.

One Syrian refugee’s account of their escape and brush with death demonstrates a terribly common plot line amongst the lives of the Syrian escapees. These are not scheming, powerful double-agents bent on destroying their adoptive countries. These are victims seeking shelter. Given the hindsight provided by the Nepali, Tibetan, and Bhutanese refugees, it could be that accepting Syrians will be no problem, but only the future will inform us of the truth. All we can know is how similar events have gone before.

Stay on the beat with new posts every day here at About Boulder. Questions, concerns, or rants? Drop them in the comments below!

Joe Inclan
Originally from Lone Tree, CO, Joseph Inclan graduated from Regis Jesuit High School in 2010. He applied to just two universities, DU and CU Boulder, and was accepted by both. Joe chose CU for its beauty, and the appeal of the open-minded and quirky city ensured him how right he was to choose Boulder. With a Bachelor’s degree in both English Creative Writing and Philosophy from CU, he has dabbled in everything from poetry to basic technical articles for 3DPrintingIndustry.com. His hobbies have a range too, from fountain pens and handwriting, to yoyos and skill toys. The most important thing for Joe is to understand things complexly. Boulder and its residents live in an evolving miasma of ideologies and cultures which demand more than a 2-Dimensional perspective. Joe’s fascination with Boulder stems from the fact that it is far more than the sum of its parts, and that is a unique quality. He is glad to be a writer with AboutBoulder.com and looks forward to spreading his knowledge of Boulder with the community.
See More Articles From Joe Inclan
Tagged: About BoulderaboutboulderABOUTBoulder.comBhutanboulderboulder coloradoBoulder CountyChogyam Trungpa RinpocheColoradocommunityDenverimmigrationInspirationJohn HickenlooperNaropaNepalPolicyrefugeesSyriaTibet
Boulder Colorado Air Quality