Home › Blog › Movies › Is It Wrong To Root For The Whale?

Is It Wrong To Root For The Whale? 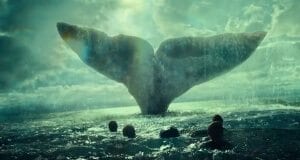 Okay, folks, time for a thought experiment. Imagine you’re a whale, a sperm whale to be precise, living in the year 1820. While most of your kind measures 50 feet long, you’re a big sucker that’s around 85 feet long. You spend your days hanging out with your pod, hunting squid, enjoying the freedom of the open ocean. Life is good, right?

Well, that’s where we get into a good news/bad news scenario. The good news is that, as the largest toothed predator on the planet, you don’t often get hassled. The bad news is, inside of your head is a liquid wax called spermaceti. It can be used as a lubricant, fuel for an oil lamp, or as a candle. Also, your blubber contains whale oil, which can also be used for oil lamps or to make soap. Remember humans, those land-bound creatures that you occasionally see on boats? When they’re not enthusiastically slaughtering each other in pointless wars, they’re coming after you and your whale posse. Bummer, right?

As a pretty freaking huge leviathan of the deep, you’re liable to get pretty pissed off at those whalers. That’s why, after seeing them kill and harvest a member of your pod, you decide you’re going to get a little payback. You head for the ship, batter it repeatedly with your nigh-unbreakable skull, and cause it to sink. In 1820, that’s exactly what happened to the crew of the whaleship Essex, out of Nantucket. Author Herman Melville used the facts of the tragedy to create his iconic novel Moby Dick. Nathaniel Philbrick was captivated by the tale of the Essex, and in 2000 wrote the very good book In the Heart of the Sea. Now, director Ron Howard has made an okay-ish adaptation, and I’m not sure we’re all the better for it.

We meet Herman Melville (Ben Whishaw), in a clumsy framing device. He has traveled to Nantucket seeking the aged Tom Nickerson (Brendan Gleeson), the last surviving crewman of the Essex. Melville is determined to get the facts of the event. Nickerson is determined not to share them. A wad of money and some spousal encouragement convinces Nickerson to talk, and then we flash back to 1820. Nickerson is now a punk kid played by Tom Holland,*and he’s a cabin boy, or “green hand,” for the Essex. The ship’s captain is George Pollard (Benjamin Walker), who comes from an esteemed Nantucket whaling family. His first mate Owen Chase (Chris Hemsworth), was born off-island, but what he lacks in pedigree, he gains in nautical experience.

There’s tension between Pollard and Chase, which the film helpfully informs us is one of the themes. As an island aristocrat, Pollard must preserve his family’s honor and lead a successful whaling expedition. Chase is promised a captaincy but screwed over at the last minute by the shipping company, and he’s offered the position of first mate. Once at sea, Pollard nearly kills the entire crew due to poor nautical decisions during a squall. Then, things get bad as the crew sails through waters that are utterly fished out. In desperation, they head for the South Pacific searching for promising hunting grounds. They find whales, all right, and one white whale in particular that’s extremely angry with them.

That’s when things get really bad, and the men must contend with the destruction of the Essex, survival in the middle of the ocean, cannibalism, and the constant presence of the whale that’s stalking them. We’re treated to burning ships, tearful declarations about survival, and thrilling scenes of derring-do. We’re also treated to a lame subplot about corporate malfeasance, and another lame subplot about how Melville doubts himself as a writer. Seriously.**

Ron Howard, as he usually does, has made a very handsome film. Looking at his filmography, you’ll notice that he generally specializes in middlebrow dramas that are appreciated and quickly forgotten. I know, Apollo 13 is perfect, and Frost/Nixon and Ransom are rock solid. But he also made Far and Away, Backdraft, and Cinderella Man, the kinds of movies that end up forgotten within a lonely bargain bin in some misbegotten Wal-Mart. There’s not a lot of passion here, and Howard keeps us at arm’s length from the horror. We should feel it bone-deep, but instead we simply understand it intellectually. Just imagine what a lunatic like Werner Herzog could have done with this material! God, it breaks my heart.

Is the problem the script by Charles Leavitt? Yeah, that’s a big part of it. One of the reasons Apollo 13 works so well is that, at it’s core, it’s about a group of very smart people trying to solve a problem. Like Steven Spielberg once said, that’s “an idea you can hold in your hand.” But is Leavitt’s script about the arrogance of Man’s relationship towards Nature? Is it about how the lines between fact and fiction can blur together? Is it about how human endeavors are ultimately insignificant grains of sand within an uncaring universe? It’s about all of those concepts and more. Leavitt needed to write a script that, like the whale, moves the story inexorably forwards. But his story is all over the place. His dialogue, while period appropriate, also feels stilted and awkward.

The cast does their duty, which isn’t surprising. Howard knows how to work with actors and coax from them solid performances. Plus, when you have pros like the craggy-faced Brendan Gleeson as the traumatized Nickerson, Tom Holland as the younger version who’s in over his head, and Cillian Murphy as an experienced second mate, you really can’t go wrong. Like the tides, Chris Hemsworth’s Nantucket accent comes and goes. He tries his best, and his performance is professional. But the problem is, he’s Acting. We feel him Acting really, really hard, when he should be transforming. I feel bad for Hemsworth, since he starred in Blackhat earlier this year, and it was a massive bomb. It seems that audiences are only interested in seeing him play Thor for Marvel. He’s a pretty good actor, and I think there’s more to him than just a hammer-wielding Thunder God.

The real events of the sinking of the Essex were a tragedy. The film is also tragic in its way, and here’s why. On December 17, less than a week from now, Star Wars: The Force Awakens will open. Like the whale, it will destroy everything in its path for at least the next three weeks. In the Heart of the Sea had an estimated production budget of about $100 million. It will be lucky to make back half that before it is utterly ignored at the box office. Had all of the elements come together perfectly, like a strongly-build whaleship, it still would have sunk without a trace.

*Holland will be playing Spider-Man for the Marvel Cinematic Universe. Soon, all of us will be in a movie for the MCU. Get ready.

**Seriously! We’re meant to feel that Melville’s authorial inadequacies are equal to a longboat full of men being crushed by a behemoth. Yeah, no.

Tim Brennan
Tim has been alarmingly enthusiastic about movies ever since childhood. He grew up in Boulder and, foolishly, left Colorado to study Communications in Washington State. Making matters worse, he moved to Connecticut after meeting his too-good-for-him wife. Drawn by the Rockies and a mild climate, he triumphantly returned and settled down back in Boulder County. He's written numerous screenplays, loves hiking, and embarrassed himself in front of Samuel L. Jackson. True story.
See More Articles From Tim Brennan
Tagged: ben whishawbenjamin walkerbrendan gleesoncharles leavittchris hemsworthcillian murphyin the heart of the searon howardtom holland
Boulder Colorado Air Quality