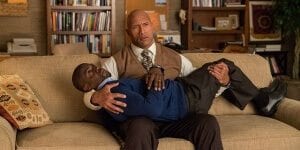 Imagine you’re at a mid-level chain restaurant. You’re with your significant other, it’s a Friday night, and all day, you’ve had to deal with nonsense and babbling idiots. All you want is to relax and have a decent meal with no nasty surprises, or surprises of any kind.

That’s why the Olive Gardens, T.G.I. Fridays and P.F. Changs of the world exist. Sometimes we want something predictable, something safe. You know what? There’s nothing wrong with that, occasionally. Not everything has to be a death-defying leap into the unknown.

The same goes for movies. Sometimes you want a flick that’s easy like Sunday morning. It’s cool, I don’t judge.* But what happens when you run into a perfectly serviceable action-comedy like Central Intelligence, and you know most people will dig it, but maybe you dig it a little less? Well, that’s why we’re going to do a two-tiered review today, folks. For the extremely casual moviegoers, I’ll keep it to an absolute maximum of two sentences. In the spirit of the movie, no heavy lifting whatsoever is required. You can split after that, I won’t be offended. For the cinephiles, we’ll dig in a little deeper.

Now, let’s do the express review. Ready? Central Intelligence is light, fun, and a perfectly good time at the movies. I promise you’ll enjoy it. Review’s all done, you can go now.

The rest of you still here? Great, welcome! Central Intelligence is an entirely unchallenging and somewhat half-assed buddy comedy that only works because of the solid performances and genuine chemistry between its two co-stars. We begin, as we must, with a flashback to the olden days of 1995. High school senior Robbie Weirdicht (Dwayne Johnson, sort of**) is a friendless chubby kid who snatches his too-brief moments of happiness by lip-synching to En Vogue in the locker room shower. He attracts the attention of bullies and is tossed, butt naked, into the middle of a crowded assembly. Everyone laughs…well, almost everyone. Calvin Joyner (Kevin Hart) is the most popular kid in school, handsome, funny, and a totally decent guy. He’s shocked by the cruel prank and is kind to Robbie.

Flash forwards twenty years later. Calvin figured he’d conquer the world after high school, but, like many of us, he settled into a comfortable but unsatisfying rut. He works as an accountant, does okay, but was just passed over for a promotion. While Calvin married his high school sweetheart Maggie (Danielle Nicolet), their marriage is missing something. He feels like his best years have passed him by. But when he gets a mysterious friend request on Facebook, Robbie re-enters his life. Robbie has changed his name to Bob Stone, lost a hundred or so pounds, and packed it back on as pure muscle. He wears a leather fanny pack, unicorn t-shirts, and jorts. Robbie is now a walking middle finger for bullies, and he radiates confidence and cheer. He’s also a spy.

Calvin may not feel like the high school hero he used to be, but due to his moment of kindness, Bob looks up to him with unquestioning adoration. Calvin inspired him to get his life on track, be somebody. He even lists Calvin as his emergency contact at work, despite the fact that they haven’t spoken in years. Naturally, he draws Calvin into an espionage plot. There are copious amounts of gunfire, car chases, a murdered partner (Aaron Paul), a relentless CIA officer (Amy Ryan) pursuing the mismatched duo, and a hand-to-hand combat scene prominently featuring a banana.

If Central Intelligence were a puppy, it would be an impossibly adorable, sweet, and kind of dumb Labrador Retriever. This puppy barely knows its name, will only sit on command about 17% of the time, and pees randomly. But it’s cute! Loving! It can only do a couple of things well, but it does them very well. Only someone as hypercritical as me would dare criticize something purely engineered to create happiness. Having said that, let’s get the bad stuff out of the way now.

Director Rawson Marshall Thurber, known for Dodgeball and We’re The Millers, has developed a reputation for making comedies that should be much funnier than they actually are. While not as irredeemably lazy as Adam Sandler and the rest of his loathsome ilk, Thurber’s movies don’t have the energy or inventiveness to keep up with some of the truly inspired characters within them. It feels like, after the first draft of the script, or the first take during a scene, Thurber decided it was good enough and moved on. But if you’re making a film with a $60 million budget, the phrase “good enough” shouldn’t be in your vocabulary.

But none of that matters, really. Buddy comedies, really good ones like Midnight Run or Butch Cassidy and the Sundance Kid, work because of the peculiar alchemy of chemistry. Sometimes it doesn’t work. Get Hard should have been a slam dunk, since pairing Kevin Hart and Will Ferrell seems natural. But those two don’t mesh well together. Pair Kevin Hart with Dwayne Johnson, though, and you got magic. They compliment each other nicely, and Hart’s exasperated motormouth fits together perfectly with Johnson’s sunny muscleman.

Another plus is that each of these guys are the embodiment of what the other wants out of life. Calvin figured he’d become a charismatic bad-ass that has bad luck slide off him like Teflon. Bob just wants long-term stability with the right girl. They also have inner lives that feel genuine. Most of us know what it’s like to be singled out by a bully, or to take a look at your life and feel like you never lived up to your potential. Calvin and Bob are both fully realized characters, and there are occasional hints of the deeper, stranger, and flat-out better movie that they could have been in.

At the end of the day, Central Intelligence is fine. It’s entertaining enough, funny enough, good enough. Hart and Johnson are playing variations of characters they’ve done before, and while they’re hardly stretching themselves, they’re doing what they do well.

**The flashback featuring chubby Dwayne Johnson was done through CGI. Johnson’s face was de-aged, then placed on the body of “All About That Bass” dancer Sione Kelepi. Couple of things about that. First, the CGI is terrible. Second, Kelepi is one hell of a dancer.

Tim Brennan
Tim has been alarmingly enthusiastic about movies ever since childhood. He grew up in Boulder and, foolishly, left Colorado to study Communications in Washington State. Making matters worse, he moved to Connecticut after meeting his too-good-for-him wife. Drawn by the Rockies and a mild climate, he triumphantly returned and settled down back in Boulder County. He's written numerous screenplays, loves hiking, and embarrassed himself in front of Samuel L. Jackson. True story.
See More Articles From Tim Brennan
Tagged: aaron paulamy ryancentral intelligencedanielle nicoletdwayne johnsonjason batemankevin hartrawson marshall thurber
Boulder Colorado Air Quality