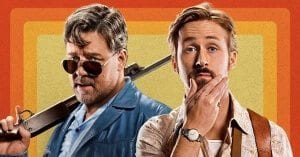 Okay, guys, time for another thought experiment. Imagine something you’re good at, whether it’s a job or a hobby. Turns out you’ve got a knack for it, even though you’ve sweated blood honing your craft. You’re trying to break into your chosen profession, and at the tender age of 25, you do so. Big time. For the next several years, you have a string of successes and a couple of not-quite-successes.

But at the end of your run, the people in your profession turn on you. Why? Is it because you make your work look easy, even though it’s incredibly difficult? Is it because tastes changed and people looked down their noses at how you do your thing? Was it all because of jealousy?

If any of this sounds familiar, it’s because Shane Black publicly lived it. In 1985, he sold his screenplay about two cops, one a suicidal loose cannon, the other a responsible family man. Lethal Weapon sold for $250,000. In 1991, his script The Last Boy Scout earned him $1.75 million. In 1994, he earned an astonishing $4 million for writing The Long Kiss Goodnight. People in the industry were scandalized. How dare a guy who churned out sleazy action flicks pull down these massive paychecks while the real artists remained unsung? So Hollywood cast him out.

For years, Black was persona non grata. But he was able to claw his way back in 2005 with Kiss Kiss Bang Bang, his debut as a writer/director. It was significant, considering it not only was the first step on the road to public rehabilitation for Robert Downey Jr., but it was the film that nabbed Downey the role of Iron Man. It also helps that it’s a terrific film, crammed with a serpentine plot, rapid-fire jokes, and entertaining chemistry between Downey and his co-star Val Kilmer. Black has been rebuilding his career, and now he’s given us The Nice Guys, another tale of sleazy Los Angeles denizens and a spiritual sequel to Kiss Kiss Bang Bang.

Set in 1977 L.A., Holland March (Ryan Gosling) is a private investigator and semi-functional alcoholic. His wife died in a house explosion, and now it’s March and his 12-year-old daughter Holly (Angourie Rice) against the world. As PI’s go, March isn’t particularly good at his job. He rips off old ladies, is prone to idiotic mistakes, and is frequently so hammered that Holly needs to drive him from place to place. His latest case involves Amelia (Margaret Qualley), a young girl who’s gone missing. Problem is, Amelia wants to stay missing, and she’s hired tender-hearted bruiser Jackson Healy (Russell Crowe) to gently dissuade him. He does so by breaking March’s arm. While Healy is a blunt instrument, he’s got enough of a conscience to only jack up those who have it coming.

But if things were simple, this wouldn’t be a Shane Black joint. Healy and March must team up to unravel a sprawling mystery involving environmentalists, pornographers, and car manufacturers. They’ll deal with a hoodlum with a code of honor (Keith David, a national treasure), the highly competent killer John Boy (Matt Bomer), and a scheming attorney for the Justice Department (Kim Basinger). They’ll also get shot at, and all in a Los Angeles that’s choking on smog and drowning in sleaze.

There is so much that works with The Nice Guys.  This is Black’s third film, and he’s developed a loose and shaggy style. Like the screenplay he co-wrote with Anthony Bagarozzi, there’s a nice balance between character work, gunplay, and classic one-liners. Black is a devotee of post-World War II detective fiction, the tattered paperbacks by Richard S. Prather and Stephen Marlowe, guys you’ve probably never heard of. Their stories were unapologetically pulpy and violent, and Black devoured them and put his own spin on them. Yeah, his characters are scumbags, but they at least make an effort to do the right thing. Black is also fascinated by masculinity, and how men respond to trauma. While they often behave badly, they’re still able to weather tough times.

Speaking of weathering tough times, Angourie Rice absolutely crushes it as Holly. Ordinarily, a movie with a tween detective would make me want to beg for the sweet release of death. But Holly is a wonderful counterpoint to all of the disheveled losers she comes in contact with. She’s precocious, but not obnoxiously so. She’s smart, but still has the bubbly energy of a 12-year-old. She’s gone through the same trauma as her old man, but she stays hopeful and engaged. Holly is Black’s response to critics who have claimed he’s a misogynist. Black doesn’t hate women, Black hates just about everybody, but Holly is his example of what we could be if we weren’t so self-absorbed.

I would not have thought that Ryan Gosling and Russell Crowe would be 2016’s comedy team to beat. Their timing is impeccable, and they have a flinty chemistry that’s endlessly watchable. Russell Crowe is not known for being a barrel of laughs, but he’s so likable here that his charm is infectious. Watch the scene where Holly gives him a Yoo-Hoo. Crowe drinks it and smiles, delighted. In the very next scene, he’s carrying a case of Yoo-Hoo into his apartment wearing a contented grin. Those throwaway moments are where he really shines.

I really would not have thought that Ryan Gosling would have such a gift as a comedian. I’m not crazy about a chunk of his roles where he’s mopey and brooding. As March, he’s a wounded antihero that Shane Black specializes in, but he doesn’t fully embrace the trauma and become Captain Buzzkill. Gosling is a sharp guy, and he knows he needs to walk a tightrope between piteous and hilarious. When he goes for comedy, he’s willing to go broad and big. He even does a callback to an old Lou Costello bit (You’ll know it when you see it.), and I kinda love him for that. Gosling and Crowe prove that, while drama is hard, comedy is really hard.

Shane Black is one of our top populist filmmakers. When you see one of his films, you know you’ll be getting a heady brew of explosions, bullets, guys chucked off buildings, and gags that nobody else could have written. In fact, nobody else makes films quite like this. They’re a joy, and watching The Nice Guys was an absolute pleasure.