I celebrated the start of Spring with family and friends in Los Angeles, where I grew up. The sunny overcrowded metropolis that I often can’t stand but do ultimately love has an amazing coffee scene. Whenever I’m back in the sprawling suburban city, I’m eager to check out new coffee shops and revisit old favorites. From homegrown standards like Lamill and Groundwork to recent imports like San Francisco’s Blue Bottle and Santa Cruz’s Verve, LA continues to impress locals and visitors alike with its abundance of specialty coffee.

My thoughts on Los Angeles are layered and I like recalling various memories, as well as making new impressions. In the years leading up to my inevitable departure from LA, when I was still denying my wanderlust, my favorite coffee meet-up spot was the Intelligentsia on Abbot Kinney in the once shady and now trendy but still pretty cool beach neighborhood of Venice. Now I prefer driving to Downtown’s industrial but quickly developing Art District, usually by myself, in order to savor the city’s only official Stumptown café and roastery. While dealing with freeway traffic to indulge in freshly roasted and brewed Stumptown coffee is a special mini-pilgrimage for me now, there are many older and more vital memories that helped form my relationship with both LA and coffee. All those years hanging out in coffee shops throughout Los Angeles—both as a customer and as a barista—shaped so much of my drinking preferences and social habits. 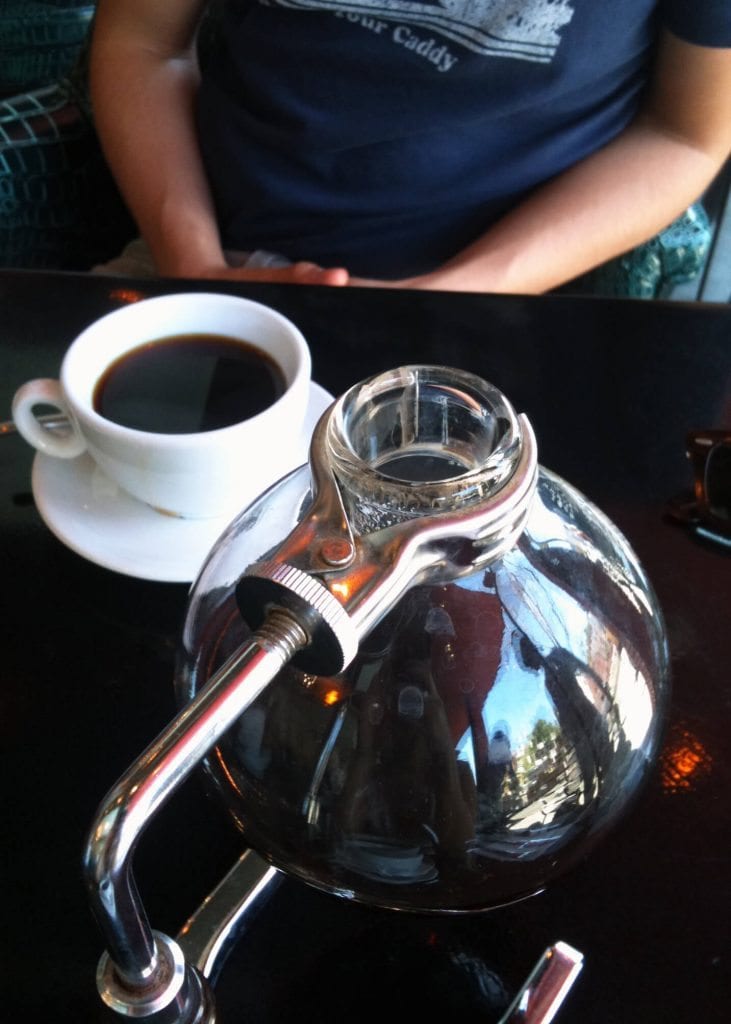 Siphon coffee at Lamill in Silverlake circa 2010

During childhood I seesawed between Coffee Bean’s ice blended and Starbuck’s ice blended drinks, with both shops situated (to this day) diagonally across from one another on Brentwood’s idyllic San Vicente Blvd. Then came the random cafés of my especially temperamental teen years—most notably Stir Crazy on Melrose—where my friends and I would go hang out for hours, talking about the lives we hadn’t lived yet but somehow still had formed very intense opinions about, when we were still too young to spend our nights at bars. Coffee shops in and around UCLA became my personal study halls during my early twenties, where the noise of a crowded café turned into the perfect background hum for reading literature and criticism or writing less impressive essays of my own. College is also when I started working part-time as a barista: the first gig was at Seattle’s Best Coffee (SBC) inside the Borders in Westwood—the once two-story flagship store of a now dead company where I saw Kanye West and Paul McCartney on separate book tours years before they ever collaborated musically (no, I don’t like their work together). Next was a brief stint at Literati Café, which was way less literary than the bookstore and where my lasting memory was of me trying to switch shifts in order to watch the 2006 World Cup games with my family (Iran’s national team never does very well and yet we keep the hope alive that they will one year). And eventually I scored a gig at the new Huckleberry Café and Bakery in Santa Monica; an incredibly popular place where I was part of the predominately 20-something opening FOH crew dealing with rich industry types while working with Vivace beans and learning tons about specialty coffee from my extraordinary coworker Brandon—one of several coworker-turned-friends I lost touch with when I moved to New York for grad school.

Although many of my fondest and most significant memories are from my three years in New York, it’s the LA timeline that’s had the biggest hand in constructing my character. I never knew how much of it was coincidentally related to coffee. It’s strange that a caffeinated drink unintentionally became one of the most vivid common threads of my life. I’m still waiting to see what it weaves for me here in Colorado.