Home › Blog › Boulder People and Events › Meet Molly: The Magic in Her Music

Meet Molly: The Magic in Her Music 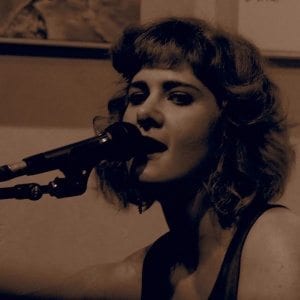 Molly Kollier, a twenty-two year old music major at Naropa University and three year Boulder resident, has been utilizing the local Laughing Goat Coffee House to communicate her message since her first days here. Since her move to Boulder, Kollier has actively sought out where Boulder most values the voices of singer/songwriters, where “people will be listening and engaged with the lyrics” (Kollier). Kollier claims that she feels safest at the Laughing Goat, a mutual feeling shared by the tight-knit community of regulars that consistently visit to the shop.

As a student, hostess/busser and musician, Kollier admirably shoots to perform once a month when she can, as a means of expressing and sharing her art; one that leaves a lasting impact and a longing for more. Kollier completely embodies the importance of music as an exchange of energy and a gift that manifests as a mutual therapy, diminishing the dynamic between “talent” and “audience.” She claims, “I don’t feel like there’s an us and them.” Kollier’s mindfulness regarding the crowds she plays for, attracts intentional crowds in return, which contributes to the overall interconnectedness of her performances.

Having begun the piano and song-writing at age three, and guitar with open mics at age twelve, Kollier’s humanness and down-to-earth self is her greatest charm. She recognizes that any art, whatever yours may be, “is never something you move into with grace,” and that “there’s always an awkward period; but if you’re willing to stick that out, something extremely powerful can come from it.” Humbly, with each performance, Kollier preserves the root of music by singing from her pain. She states, “That’s what music is all about; some people get swept away by the glamour of mass followers, (not that I wouldn’t love that, too), but the fact that people can come up to me at the end of the show and we can sip wine is really beautiful.” As a self-defined introvert, Kollier claims that “when it comes to performing, I’m being heard in a space where I feel the most beautiful, in a space where I can give all of me.” 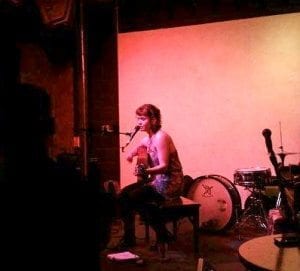 Kollier performing at Boulder‘s famous “The Laughing Goat” (via Facebook)

Part of Kollier’s craft is recognizing that while her music resembles a kind of grieving experience, textured with soulful, edgy, folk notes, there is a desire to entertain people as well. This is the core of real music; the conscious intention behind it; to provide every aspect of what the audience may be looking for, without residing on just one. There is a balance between performer and audience, to cater to both parties in a way that leaves both with a healing experience. Kollier’s bravery to reveal herself on stage in a productive manner for all, shows people that “it’s nothing to be afraid of,” and that pain “can be really beautiful” (Kollier).

Molly Kollier is a beautiful soul indeed. She is the human behind the music that everyone longs to know. Her music is everything anyone strives to put words to. Her ability to create extraordinary music from ordinary experience is some kind of magic. Attending Kollier’s shows comes with a promise that her intentions are pure. Kollier performs like a host at a dinner party, with the audience as her guests. She hopes more than anything, that upon leaving, her listeners will “feel touched and uplifted in some way; in a real, human, this-is-life-whether-you-like-it-or-not, full throttle” kind of way.

The success continues to unravel for Molly Kollier, as she will be exploring new venues to expand her exposure to Boulder‘s many mindful audiences. Kollier knows that “Boulder tends to draw in people who care about connecting, something so unique and special here.” She cherishes the support of local and small businesses, which is why Boulder works for her, and why she works for us. A highlight of her career has been performing at the Vapor Distillery in town, at an event called “Boulder in the Round,” taking turns with other musicians in a form of popcorn playing. For more of Molly, check out her EP on Itunes entitled, “Home Alone and Impatient,” or her soundcloud account online. Come meet Molly at the Laughing Goat; she’ll be waiting to share with you the songs of her soul and of her self, the greatest gift anyone could give; the greatest gift anyone could receive.