The new film by Christopher Nolan, director of Inception and the Batman movies (no, not the Michael Keaton movies, if that’s what you were hoping) has just released his new film, Interstellar.

I’ve been waiting for this movie for months, gobbling up trailers, anticipating, hoping it would be everything I wanted it to be.

I wasn’t disappointed, but I wasn’t blown away, either. 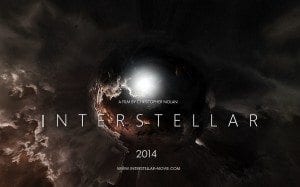 Interstellar is a story about the near future, and the earth has become uninhabitable. Cooper (Matthew McConaughey) is recruited by the remains of NASA to fly into space and find a habitable world for humanity to settle. Sounds simple, right? Well, this is a Christopher Nolan movie, so it’s not quite that easy.

When this movie worked, it fired on all cylinders. There are a few big action set-pieces that Nolan gets exactly right, and will have you squeezing your popcorn box and spilling your drink in your lap. Tense, gripping, and powerful. There are a few of those typical Nolanesque plot twists that flip the story on its head. Not quite to the level of Inception, but still pretty good.

One plot twist (and I won’t give it away, don’t worry) has to do with something early on in the film that seems like coincidence, but is explained by the end. I had been hoping and praying there was a good explanation for that one, because otherwise, it seemed like a giant plot hole. One thing about all the Nolan films is that their scripts are always clever, and leave you with a few questions.

Now, for what didn’t work. Often, I was quite confused by what was going on. Much of the dialogue whips by while a loud score is playing in the background, and I had no idea what they were talking about. Balance that with some quiet moments where Cooper and Brand (Anne Hathaway, in one of her short-haired roles) wax philosophic about humanity that run the risk of becoming a little too preachy.

And I know that Matthew McConaughey is now an Academy Award winner, but sometimes his good ol’ boy routine grates on my nerves. He’s supposed to be a super-smart space shuttling flying pilot, but he tosses out lines like “there you go, slick,” and I just don’t buy it.

Sometimes Interstellar tries to be about too many things, but at its heart, it’s a movie about valuing family and relationships.

So, overall, yes, go see this movie. See it on the big screen. Be aware that it’s almost three hours, though, so you might want to go with the small soda from the concession. You’ll thank me later.