When I was a little kid and saw The Karate Kid for the first time (obviously, the Ralph Macchio version, not the Jaden Smith version), the movie immediately made me want to learn karate. same with Top Gun. After that, I wanted to fly airplanes, wear Aviator sunglasses, and have a cool nickname like Ace or Torpedo or something.

I had thought maybe Kill The Messenger might do the same thing for being a journalist. But not so much. This is a good movie, but it’s not exactly feel-good pro-journalism material.

If you know the true tale of Gary Webb, you know things don’t end well for our hero. If you don’t know, I won’t spoil anything further. 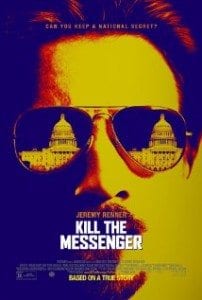 Kill The Messenger tells the story of journalist Gary Webb, who uncovered facts that the CIA was bringing drugs into the US, and using those profits to fund a war in Nicaragua. This, in turn, became a media storm that lead to the conclusion that the government intentionally addicted African-American communities to crack.

The movie focuses on how publishing these articles affected Webb and his life, how other news outlets tried to discredit him. But it features mostly scenes from Webb’s home life, how he and his family are affected by everything going on.

The film plays out largely in microcosm with Webb and his son. It’s a movie about integrity. While it does have a lot of those “journalism thriller” clichés like “I won’t stop until the world knows the truth!” that you can smell coming a mile away, it works well at telling the smaller story of a man whose life falls apart and how he desperately tries to keep it together, to keep going, to keep exposing lies.

It’s a star-stuffed movie, with all kinds of big-name cameos like Michael Sheen, Andy Garcia, the terrifically-underrated Oliver Platt.

Interspersed throughout is real-life footage from news reports of that time, to drive home the fact that (at least some of) this actually happened. There’s a lot to be angry about here, and that’s one of the main takeaways of the movie.

Overall, it’s a pretty good film. Doesn’t break any barriers, will certainly make you a little more suspicious of American government and the news media (if you weren’t enough already), but it’s not the best movie you’ll see this year.