No, not the comic book character.

Nightcrawler is a film starring Jake Gyllenhaal (and thank you, spellcheck, for the assist on that one. I would never get that right on my own) about the ambitious Louis Bloom, who stumbles into working as a freelance videographer. He then sells his footage to a news organization, and he’s determined to work his way up from nothing to a position of importance.

This is a movie wrought with tension and anxiety. It’s stressful to watch, which is ironic, since it’s mostly about people filming stuff. But all of that tension and anxiety serve to make for a riveting story, and Louis Bloom’s anti-hero is one of the most compelling characters I’ve ever seen on the big screen. Think Walter White but with a video camera instead of a meth lab. 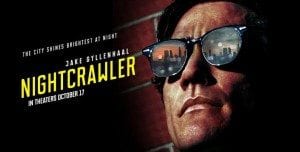 Gyllenhaal seems to pick offbeat roles, and this one is no exception. Bloom is not a nice or moral guy, but his drive to succeed propels the story. He’s a loner, socially awkward (maybe even somewhere on the spectrum), and the only thing outside of himself that he seems to care about is his houseplant. Maybe that’s a nod to Léon in The Professional?

As the film escalates and you wriggle in your seat, Gyllenhaal ups the ante. As an actor, he keeps improving with each role, as he was one of the brightest spots in last year’s Prisoners. This is definitely his finest performance to date. He shows you bits and pieces of Louis Bloom, but you always feel like there’s more under the surface.  I expect an Oscar nomination, for sure.

The film itself is a satire of media exploitation wrapped in a thriller. But it doesn’t ever feel preachy. It does descend into melodrama once or twice, but the rest of the movie around it is so thoroughly gripping that you’ll forget those moments soon after they happen.

Of all the awards-bait prestige movies of 2014 so far, this is the first great movie. Wonderfully shot, acted, and scored. You can’t go wrong with this one. Just be ready to squirm a few times.