Even though these movies came out before I was born, I have fond memories of watching biblical epics like Ben-Hur and The Ten Commandments as a little kid. Charlton Heston and his big white beard daring Ramses to pry the staff of God from his cold, dead hands. Such spectacle! Such plagues!

Since Noah last year, the biblical epic is making a bit of a comeback. But times have changed. In the 1950s, it probably seemed perfectly fine to have caucasian Charlton Heston playing the Hebrew Moses. Today, with Batman himself in that same role, it just doesn’t cut it. 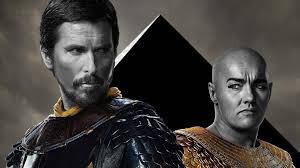 Audiences demand authenticity in a way they didn’t before; suspension of disbelief doesn’t reach as far as it used to. In this movie, you have Batman, Ellen Ripley, Barton Fink, Ghandi, and even Jesse Pinkman playing Egyptians and Hebrews. Ridley Scott himself said he couldn’t have financed this movie using a racially authentic cast, and I suppose I can understand that. But, when you fill the rest of the supporting roles with people who actually look like Egyptians, it makes your lead actors stand out, and not in a good way. Plus, those accents… Sigourney Weaver sounds American, Joel Edgerton sounds British, and Ewen Bremner (Spud from Trainspotting) sounds distinctly Scottish. It doesn’t jell together.

Maybe you can look past all that. If you can, you’ll find a well-made movie, with plenty of biblical bang for your buck. You already know the story, so there’s little surprise there.

Joel Edgerton (from–and I’ll say it again– the criminally under-appreciated 2011 movie Warrior) is the best thing about this film. He brings a fierceness and passion to the role of Ramses, and it might be worth sitting through this never-ending movie just for him. The special effects are pretty impressive too, if you’re into plagues of 3D locusts and frogs.

If you’re a religious type, you might find certain things offensive. I won’t get into that, other than to say that if you didn’t like Darren Aronovsky’s Noah because of the way it strayed from the myth, you’ll probably have the same issues with this movie.

Would I recommend it? Perhaps, but only on the big screen. Because until you’ve experienced locusts in your face, you haven’t really lived.