Video Vault: Edge of Tomorrow Is Better Than Expected

I thought this was going to be a dumb action movie, but the pre-release reviews were glowing. So I gave it a try.

And this is a good movie. The uneducated comparison is Groundhog Day meets Starship Troopers, and while it is that, there’s a lot more going on here. It’s not nearly as predictable as that mashup sounds. 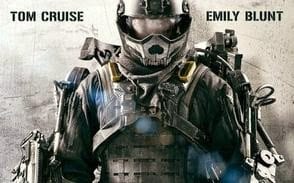 Tom Cruise tones down the machismo, playing a flawed and unlikable character who– obviously– changes and becomes likable over the course of the film. He’s at his best in the quiet moments, growing the chemistry with Emily Blunt between the gunfights. I genuinely wanted them to succeed; I cared about them and bought in to the forward motion of the story.

This movie is funny without resorting to cheesy Hollywood blockbuster one-liners. It has a smart script that balances action pieces with human moments much in the way The Avengers did, while pushing toward a massive and exciting climax. It even contains a few wink-and-nod moments, such as a scene in which Cruise overhears two guys arguing about why the aliens have invaded earth. One claims it’s for the minerals in the soil. The other guy says it’s to steal earth’s oxygen. Cruise interrupts them and says, “does it matter?” It’s a note to the audience: shut up and enjoy the ride. The exposition isn’t important here.

And the aliens themselves don’t end up stealing the show, which is a credit to the director and special effects guys. The octopus-like invaders look cool, but they don’t overshadow the humans.

My one complaint is that it’s a little too long, and I got a bit ancy once the big finale was approaching. By that point, the movie became predictable and I wanted to get it over with. But with that said, I would definitely recommend this movie, as long as you can put your couch-jumping prejudices aside.