Home › Blog › Much Ado About A Patio: Sanitas Brewing Co.

Much Ado About A Patio: Sanitas Brewing Co.

I am a sucker for springtime in Colorado. Aside from the random and inevitable snow that will blanket the Flatirons every once in awhile, springtime in Boulder is simply majestic. People will emerge from their Netflix and delivery pizza hibernation, flip on a pair of Ray-Bans, don a stylized tank top, and will then explore the great eateries (and drinkeries!) that this city has to offer. The Pearl Street Mall, in all its glory, becomes once again a destination for Coloradans from all over, eager to take in the joviality of buskers, ice cream, and sunshine. Now, head a few minutes east of the Mall on Pearl, and you’ll find yourself in a location that certainly has no foot traffic: the Sanitas Brewing Company.

Nestled in a warehouse on Pearl Parkway (the Street becomes the Parkway just east of 30th), Sanitas Brewing Company has been providing wobbly pops for the people of Boulder 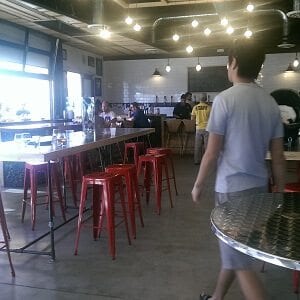 since September of 2013. In that time, the brewery has seen quite a bit of success, having implemented a rather large expansion effort starting just last May. The brewery, which takes its name from the nearby mountain (which I like to call Mt. StairMaster, for the record), has a truly unique space. You might not see it driving up. In fact, driving to the east Boulder Tap House is really a game of questioning expectations. The Tap House shares its warehouse space, and the only beacon guiding you to Sanitas’ front door is their iconic owl, derived from the owl of Athena, probably.

Walking into Sanitas’ tap house, you immediately forgive the brewery for its off-the-beaten-path location, as well as its imposing, industrial facade. Inside, the place is modern and industrial, yes, but it is also very sunny, very open, and very welcoming. However, Sanitas Brewing Company’s pièce de résistance would have to be their patio area. Home to tacos, bags, and boccie ball, the patio and lawn is the place to be at Sanitas. Also, if you are a train enthusiast, there is literally no better place to watch the locomotives chug past (and, no louder place either!).

I visited Sanitas back around when they first opened, and the general consensus of the my local conglomeration of beer enthusiasts was that they were producing beer that was “Meh,” at best. Not one to hold onto preconceived notions, especially when those notions are an alcoholic beverage plopped down in front of me, I wanted to go back to Sanitas: not just for the brewery to earn redemption in my palate, but because it was a sunny, 70-something day, and I was feeling a very severe Vitamin D deficiency, and the lawn by the train tracks felt like the most appropriate cure. Let’s get it in!

If you are lucky enough to be at Sanitas when a train goes by, the brewery will offer some of 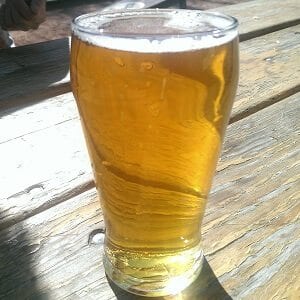 their “Train Beers” at discounted rate for fifteen minutes. Unfortunately, no trains were in the vicinity when I ordered this one; rather, it was hot, I was thirsty, and I felt like this beer just sounded beyond refreshing to me. As a style, pale wheat ales are few and far between, so I must give Sanitas some credit for that. All of the beers in the “Train Beer” series are touted as light, sessionable, and full flavored. This beer has a beautiful and clear golden hue, which is capped with a light and quickly disappointing foam. It has a very subtle smell, where the wheatiness and gentle hoppiness certainly shine on top of everything else. The flavor is crisp, wheaty bready, and bitter. The hops necessary to make this one a pale ale did give the beer a strong, bitter aftertaste that lingered. For me, the flavor was a bit one dimensional. Sip. Wheat/Hops. Done. In the moment, it was not too bad: certainly quaffable, but let’s just say I was excited to see what else was on the menu.

With the sun still warming me up, I was again looking for a beer that was refreshing, and not heavy. I think a farmhouse ale like a saison is a good answer to this, even though drinking 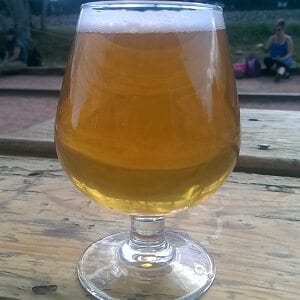 saisons anymore is just a more alcoholic version of picking chocolates out of one of those mixed boxes (Mr. Gump: eat your heart out). I believe this beer is primarily Sanitas’ original Saison, with cherries added in. I’ve seen that the brewery likes to do this with their beers, particularly their saison. When I ordered my first beer, they had a saison with Bartlett pears, which I sadly missed. On the nose, it has that funky, bubblegum aroma common to beers in the style. The beer is a hazy honey color, with a thin, white head. The flavor is spicy, sweet, and tart, thanks to the cherries. The beer certainly wasn’t soured, but did have a pleasant sourness to it. Many saisons finish with a very sweet, syrupy flavor. To my delight, this was crisp and dry. Now, this is the perfect beer for a warm spring day. If I weren’t attempting to bring you fine folks notes on a few different beers, I probably would have ordered a few more of these.

Above any beer on the menu, this is probably the one that put Sanitas on the map. Being 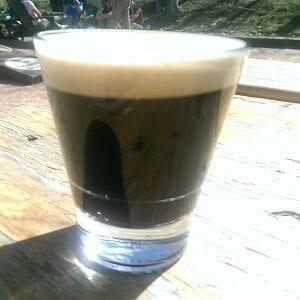 mentioned on The Denver Post’s “favorite beers of 2014”, this is the one to try (if you like hops, that is). At the brewery, they sometimes offer this beer on nitro, which is something that you don’t often see for IPAs of any color. I had to bite. The nitro gave this beer a thick, custardy head which was stark white against the dark cocoa color of this unfiltered beer. Like many beers that are simply doused in hops, on the nose, this beer was very piney, but also had an earthy, caramel aroma to it. Those dark malts were certainly at work in this brew. The flavor is perfectly balanced, between the chocolate and caramel notes of the roasted malts, and the orange peel and pine punch of the hops. American Black Ales are beers that I love to try, because they do offer the promise of being the best of both worlds: a hoppy, yet dark beer. Of the ones I’ve tried, Sanitas’ delivers.

While I strongly believe atmosphere plays a very large role in the Tap Room experience, we cannot ignore the quality of the beer. In that regard, I believe Sanitas has come a long way. If you’re in the area, sit down, grab a taco (or 4), and come soak up the Colorado sun while enjoying some innovative and tasty brews.