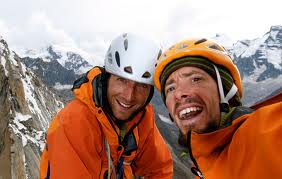 Adventurers and friends, Micah Dash and Jonny Copp via google

This past weekend, Boulder Theater hosted the 11th annual homegrown Adventure Film Festival, showing over thirty films, encapsulating over thirty stories of life in the wild. This festival was particularly impactful as it was founded by thirty-five year old Boulder resident, Jonny Copp, who passed tragically in an avalanche on an expedition in China in 2009, as well as thirty-two year old Micah Dash and twenty-four year old Wade Johnson. This film festival honored the lives and memories of the highly respectful adventurers and alpinists through stories that highlighted the spirit of adventure, the human need for it and the fullest love that comes from it.

Adventure is something that Boulder encompasses fully with its abundance of mountain hiking, biking, and skiing trails, all thanks to our scenic proximity. The Adventure Film Festival wasn’t just a collective of films showing the coolest places to catch the best waves or the hardest mountains to climb; it presented angles and questions regarding why people climb in the most challenging and offensive weather conditions, why people choose to endure the wrath of mother nature and what that means for us as minuscule humans. The film, “An American Ascent,” represented the first African American expedition, climbing North America’s highest peak at 20,320 feet. It referred to Martin Luther King Jr.’s speech during the March on Washington, looking at what it means for freedom to ring from the mountaintops by traveling directly to them. History is being made as we speak in a mind-blowing way through a human-global interaction that stretches man’s physical, mental, emotional and spiritual capacities at our highest and deepest levels. Another documentary, “A Grand Pursuit,” voiced the experience of bold explorers climbing the Grand Teton, where Vasu Sojitra becomes the first leg amputee to climb without the use of a prosthetic leg. Other films mentioned the importance of global education, the reparations of the Boulder flood of 2013, nonprofit organizations pairing with adventure-based philosophies, environmental preservation, and preserving the Self through the preservation of Other: this beautiful, incredible planet we live on.

This weekend’s past event was not just another Adventure Film Festival: it was the Boulder Adventure Film Festival, home of some of the greatest adventurers of all time, who live to teach their children about the importance of living through adventuring, who believe that there is no other way to live. Close friend of Jonny Copp, respectable dad and creative filmmaker, Jeremy Collins, said in his beautiful tribute film to Copp’s legacy that our twenties are for learning, our thirties for building, and our forties for thriving. These adventurers live life inversely of how we’re accustomed to live; through the mundane, corporate, day-to-day tasks of society. Collins, on his mission to distribute Copp’s ashes in all four directions of the world upon the highest peaks, reflects that life happens in between summits. The kids, work, the dance and soccer practices happen and months go by. Whereas most people would consider those daily, smaller-scale events “life,” Collins redirects the audience to redefine what life means. What does it mean to live? What does it mean to be alive? The fear that keeps us home alone is the fear that fuels these adventurers. The limitations we put on ourselves are myths adventure helps us shatter. These stories represented people who are learning, building, and thriving in a way that is the most inspiring, the most admirable, and the most exerting; but most importantly, they reminded us that life is just as accessible to each and every one of us. It is not out of reach, in fact, it is right outside the door, waiting for us to live it. 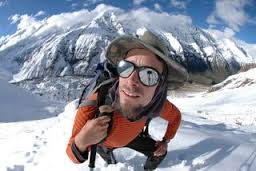 There are no qualifications or requirements needed to push oneself to be better and do better. This film festival was not one solely for extremists; it was for the day-to-day folk who take pride in learning about themselves and the world they are living in. It was for anyone and everyone who is willing to try something new. Maybe the end result is not about going on a two-week bike tour or climbing Mt. Everest right now. Maybe it’s about putting away your phone and spending the day with a book at a nearby creek. Maybe it’s about taking off your shoes and getting your feet wet in soil or damp with sand. Maybe it’s about leaving your house and with that, leaving the expectations you have for yourself and for your day behind. Maybe it’s the smallest breaks in the routine that will lead us to a bigger, better life. It’s in the supposing where the changes will happen. What are you willing to do differently? In the seeking, we are leading. We are all scientists gathering intel of our own lives. What works? What doesn’t? What feels good? Where is my heart craving that I go? Will I actually take it upon myself to do it? This festival asks that we “Climb. Ride. Slide. Fly. Fight for your environment. Inspire. Go higher than you’ve ever dared to go.” Henry David Thoreau reminds us to go confidently in the direction of our dreams. Live the life we’ve imagined. The question is…are you willing? Will you please report back?