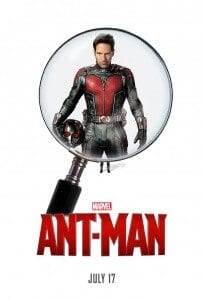 Let’s pretend, for a moment, that I have access to a time machine. My current self, ancient and decrepit, travels back to the Good Old Days when I was a youthful firebrand who prepared to bestride the world like a colossus. Upon meeting, Old Me says to Young Me, “Couple of things to tell you about the future. First, you’ll end up shaving your head to avoid looking like Larry from The Three Stooges.” Young Me is not impressed. “Ugh. So what else?”

Old Me goes on. “There are no flying cars yet, and many people think Donald Trump is a viable candidate for President.” Young Me is absolutely gobsmacked. “What kind of nightmarish hellscape is the world going to become? Is everybody in the future a moron?” Old Me chuckles at this display of naivete. “Don’t worry, there’s good news. There have been 11 movies made in the interconnected Marvel Cinematic Universe so far, and the 12th, Ant-Man, is really good.”

Do you know what would happen next? Young Me’s head would explode in shock, thereby negating my own future existence. For a number of reasons, Ant-Man shouldn’t exist. The fact that it does exist, it’s not terrible, and it’s actually charming and fun is a minor miracle.*

Career criminal Scott Lang (Paul Rudd) has just been released from San Quentin State Prison. While he’s a professional thief, or burglar, he’s not a bad guy. He’s pretty motivated to go straight this time, and he wants to be the kind of father his young daughter Cassie (Abby Ryder Fortson) thinks he is. She’s in the minority, since Scott’s ex-wife Maggie (Judy Greer) thinks he’s a screw-up. Maggie’s new husband Paxton (Bobby Cannavale) is a cop who knows Scott is a screw-up, and he’s trying to minimize the damage Scott will inflict upon the family.

We’re also introduced to the brilliant scientist** Dr. Henry Pym (Michael Douglas). He’s developed the Pym Particle, a serum that gives the user the ability to shrink to insect size (and beyond), but retain mass and strength. His scientific acumen has helped him to found his own company, and do some “consulting” work with the spy agency S.H.I.E.L.D.. Fans of the comics know that Pym helped to originally found The Avengers and, in an opening scene, a digitally de-aged Douglas hints at those connections. The digital work is creepy and shockingly good, Douglas looks like he just finished shooting Wall Street.

As a businessman, Pym is apparently an excellent scientist, and he loses control of his company to his conniving former protege Darren Cross (Corey Stoll). Cross has developed a knock-off of Pym’s miniaturization process, the Yellowjacket Program, and he’s looking to sell it for military applications. To make matters worse, Pym is on the outs with his daughter Hope Van Dyne (Evangeline Lilly). Hope still works for her dad’s company as Cross’ second-in-command, but she’s not thrilled with his frequently absent and emotionally aloof parenting style.***

Pym suspects Cross is up to no good. When Scott is thwarted in his attempt to go straight and returns to The Life, Pym sees potential in him to become something more than himself, something bigger…or smaller, as the case may be.

Director Peyton Reed, with a script originally written by Edgar Wright and Joe Cornish, then rewritten by Rudd and Adam McKay, has crafted a fast and funny heist film that definitely feels like it’s a part of the MCU, but not beholden to it. As much as I dig the Avengers films, it’s a nice change of pace to move away from the super-soldiers/gods/geniuses, and focus on some of the weirder corners of the MCU. Let’s face it, on the list of super powers people would wish for, shrinking is pretty far down the list. But Pym and Lang’s “size-fu,” a system that revolves around rapid size-changing in combat, is so amazingly cool that I could watch hours of it.

Plus, it’s pretty great to have a blue-collar protagonist like Lang. He’s not rich or well-connected. Lang is a bright guy, and we see he’s gifted at problem solving and improvisation. But he’s just a regular guy who generally wants to do the right thing, and particularly do the right thing for his kid. The idea of a superhero who’s also a parent is compelling, and I’m interested to see how that worldview bumps up against the larger MCU.

Speaking of Lang, Ant-Man would fall apart without Paul Rudd’s low-key and likable performance. He sells the reaction to all of this insanity going on around him, but he never winks at or condescends to the material. Like Macbeth, he’s initially horrified by the goings-on around him, but gradually becomes more enthusiastic as time goes on. He’s helped by Douglas, an actor who simply never phones in a performance. Douglas’ Pym is usually the smartest guy in the room, but what does that mean when he’s largely failed as a father?

Douglas and Rudd also do good work with Evangeline Lilly. Her Hope is smart, brave and is much more qualified to be a superhero than Scott is. In fact, there are two post-movie stings, and in one of them, Hope delivers a line that should be enormously satisfying to female fans.

As good as Ant-Man is, it ain’t perfect. The MCU hasn’t been great when it comes to compelling and entertaining bad guys. Corey Stoll’s villainous Cross doesn’t have the oily charisma of Tom Hiddleston’s Loki, or the insecure bravado of James Spader’s Ultron. He comes off as generically evil, then generically crazy, then a bland fusion of crazy/evil. Along with that, there’s an info dump during the first hour that really screws up the pacing. Probably the last 30 minutes are perfect, where the film just sprints. But before it gets to that point, things repeatedly slow down so that the plot can be explained. It’s necessary, but it feels clumsy. Plus, a good friend pointed out to me the numerous occasions that Michael Douglas says, “I want to show you something,” or some variation of that phrase. You could probably make a pretty good drinking game out of that.

Regardless, Ant-Man is an overall success. It’s highly amusing, exciting, and it’s great that this odd little corner of the MCU got some love. If it’s wrong to get excited by the phrase in the credits reading, “Ant-Man Will Return,” then I don’t wanna be right.

*Ant-Man was originally supposed to be part of Marvel’s Phase 1 slate of films, and it was meant to be directed by visionary filmmaker Edgar Wright. Wright worked on the project for years, but dropped out in May of 2014, citing “creative differences.” It was widely assumed that whatever poor schmuck tapped to replace Wright would churn out a pale shadow of what could have been. In fact, many film geeks have tried to deduce which of Wright’s contributions still exist in the finished film. Hey, everybody needs a hobby, even if it is a waste of time.

**All of the scientists in the MCU are brilliant? I want to see where the mediocre scientists work!

***I love how movie scientists are always obsessive, emotionally aloof disappointments as parents. Thanks, science.

Tim Brennan
Tim has been alarmingly enthusiastic about movies ever since childhood. He grew up in Boulder and, foolishly, left Colorado to study Communications in Washington State. Making matters worse, he moved to Connecticut after meeting his too-good-for-him wife. Drawn by the Rockies and a mild climate, he triumphantly returned and settled down back in Boulder County. He's written numerous screenplays, loves hiking, and embarrassed himself in front of Samuel L. Jackson. True story.
See More Articles From Tim Brennan
Tagged: adam mckaycorey stolledgar wrightevangeline lillymichael douglaspaul ruddpeyton reed
Boulder Colorado Air Quality