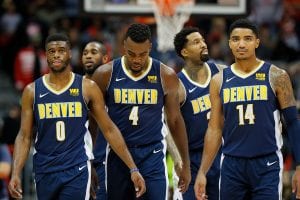 Last Thursday, the Denver Nuggets may have caught a break against Oklahoma City when officials missed a traveling violation on an out-of-bounds play, leading directly to a Gary Harris game-winning shot at the buzzer.  The dramatic win and solid first-half-of-the-season play has the Nuggets sitting at 27-25 and positioned in the eighth and final playoff spot in the Western Conference.  Failing to call traveling in this league is hardly newsworthy, but as the Nuggets fight for a playoff birth against teams like the Jazz, Pelicans, and Clippers, the breaks just keep on coming. 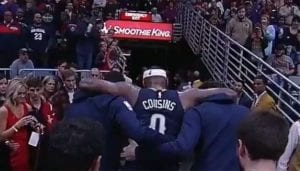 n they gave All-Star forward Paul Millsap a 3yr/$90 million contract during the off-season. But Millsap hasn’t played since November after suffering a left wrist ligament injury (at least it wasn’t broken). Millsap’s return to the lineup sometime after the All-Star break will add tremendous depth and leadership as the Nuggets try to hold on for a playoff spot.

Playing in the Western Conference is hardly a break as Golden State, Houston, San Antonio, Minnesota, and Oklahoma City are safely in the playoffs and the Nuggets tough schedule down the stretch and road woes (7-18) are problematic.  But with Nikola Jokic playing like an All-Star, and the improved play of Jamal Murray and Gary Harris, the Nuggets just may be going for broke in the first round of this year’s playoffs.

Alan Tapley
Alan Tapley is an educator, author, and blogger who has lived just outside of Boulder for the last twenty years.  His published work includes two novels, two children’s books, a series of cartoons in the Minneapolis Star-Tribune, and multiple sports related articles. His love for family and the state of Colorado is only matched by one thing, his passion for sports.  The first baseball game he ever attended was at Wrigley Field, before there were lights.  At the final Bronco game at the old Mile High, he allegedly cut out a piece of his seat in the South stands.  But regardless of being here for the Avalanche’s last Stanley Cup, the Rockies only World Series appearance, and all the Broncos’ Super Bowl Victories, his wife never fails to remind him that he wasn’t at the University of Colorado in 1990, like she was.  The year the Buffs football team won the National Championship
See More Articles From Alan Tapley
Tagged: Blake GriffinDeMarcus CousinsDenver NuggetsGary HarrisGordon HaywardJamal MurrayLos Angeles ClippersNBANew Orleans PelicansNikola JokicPaul MillsapPlayoffsUtah Jazz
Boulder Colorado Air Quality