Home › Blog › Sports › Why Do We Still Hate the Raiders?

Why Do We Still Hate the Raiders? 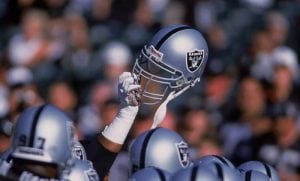 There are three unwritten laws that we live by in Colorado.  Avoid I-70 during peak ski weekends, don’t turn off your sprinkler system just because it snows a little early, and most importantly, always hate the Raiders. The rivalry goes back years, but the epicenter stems from the late seventies when the Oakland matched Kenny Stabler, Cliff Branch, and Fred Biletnikoff against Denver’s Orange Crush defense of Randy Gradishar, Tom Jackson, and Billy Thompson. The games were violent, nasty, physical matchups that often ended with blood on the field, and fights in the stands.  But as the years go by, the question needs to be asked. Why do we still hate the Raiders?

It’s understandable to hate Raider fans and their wild costumes, Mark Davis and his silly hairpiece, or Chucky and his arrogant smirk. To call the rivalry dead would be an understatement as each victory over Oakland tastes a little sweeter, and each loss hurts a little more. But whether in Oakland, Los Angeles, or Vegas, history is fading.

Alan Tapley
Alan Tapley is an educator, author, and blogger who has lived just outside of Boulder for the last twenty years.  His published work includes two novels, two children’s books, a series of cartoons in the Minneapolis Star-Tribune, and multiple sports related articles. His love for family and the state of Colorado is only matched by one thing, his passion for sports.  The first baseball game he ever attended was at Wrigley Field, before there were lights.  At the final Bronco game at the old Mile High, he allegedly cut out a piece of his seat in the South stands.  But regardless of being here for the Avalanche’s last Stanley Cup, the Rockies only World Series appearance, and all the Broncos’ Super Bowl Victories, his wife never fails to remind him that he wasn’t at the University of Colorado in 1990, like she was.  The year the Buffs football team won the National Championship
See More Articles From Alan Tapley
Tagged: Billy ThompsonCliff BranchDarrius Heyward-BeyDenver BroncosFred BiletnikoffJaMarcus RussellJon GrudenKen StablerKhalil MackLane KiffinLas VegasMike ShanahanNFLOakland RaidersRandy GradisharTodd MaranovichTom Jackson
Boulder Colorado Air Quality