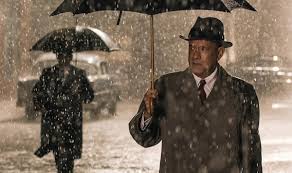 History has a delightful habit of repeating itself. It seems like humanity falls into the same traps and creates the same problems. Luckily for us, there are usually people of goodwill and upright character to keep us from collectively toppling into the abyss. For example, our country is currently involved in a cold war, or something that looks an awful lot like a cold war, with Russia. Yes, again. For those of you who aren’t ancient like me, it’s time for a brief history lesson.

After the end of World War II in 1945, the majority of our planet was controlled by either the United States or Soviet Russia. We had hundreds of nuclear warheads pointed at each other* and gave bellicose speeches condemning the evils of Communism or the corrupt Capitalist system, depending on which side you were on. We spied on each other, collected what information we could for any real or imagined advantage, and loudly denounced the other side when we caught them doing what we were also doing.** The worst of it was in the 1950’s-1960’s, and Steven Spielberg’s latest film, Bridge of Spies, brings the time and the people to tangible life.

James Donovan (Tom Hanks) is a New York insurance attorney. He’s good at his job, very good, and he’s got the ins and outs of the law down cold. His intelligence is tempered by an innate decency, which makes him the perfect man for the job. You see, Rudolf Abel (Mark Rylance) seems to be a mild-mannered painter. He’s actually a Soviet spy, and he’s been arrested for espionage. The U.S. government drafts Donovan to act as Abel’s attorney. They want to show the world in general, and the Godless commies in particular, that our legal system works. Abel needs a lawyer that’s good, but not so good that he’ll get off. Problem is, Donovan’s faith in the Constitution is unshakable, and he’s determined to free his guilty-as-hell client.

But that’s only the first act! More intrigue comes into play, when Francis Gary Powers (Austin Stowell) is shot down over the Soviet Union in his top secret U-2 spy plane. The Americans decide to make a prisoner exchange, Abel for Powers, and Donovan is sent into Berlin to handle the negotiations. Things get even more confusing when an American student is captured in East Berlin on trumped-up espionage charges. The CIA just cares about the return of Powers, and they  claim they’ll negotiate for the student’s release “later.” Donovan refuses to leave another man behind, and things get really complicated.

Bridge of Spies may look a lot like Oscar bait. It’s directed by Steven Spielberg, arguably the world’s greatest living director, and headlined by Tom Hanks, an actor of unimpeachable moral authority and quiet intelligence. The screenplay is expertly written by Matt Charman and Joel & Ethan Coen, so this is a pedigreed production all the way. Here’s the thing, though. When a film is Oscar bait, it’s genetically engineered for the sole purpose of winning awards.*** It’s classy, but not overly artsy. It has a positive social message. It’s rarely anyone’s favorite movie.

But Spielberg has made a film that’s a sibling, or at least a cousin, to his 2012 triumph Lincoln. Both films feature the tension between a nation’s high-minded rhetoric and its dismissal of principles in order to “get results.” Donovan meets with a series of men in prison cells, luxurious offices and decaying buildings. He learns that espionage is all about making deals. He tells one man, “We need to have the conversation that our governments can’t.” It’s all in service to an ideal, a belief that decency trumps fear.

Spielberg’s production design team is outstanding. From Brooklyn, to the Supreme Court, to the chaos of Berlin, there’s an intense level of detail on display. Every area and room feels real, occupied by human beings. They also help to set not only individual tones for scenes, but create a thematic thread throughout the film. His usual cinematographer, Janusz Kaminski, does his usual great work. Lots of shots of furtive men in overcoats and fedoras. He uses a varied color scheme, the brightness of Brooklyn contrasted with the washed-out grays of East Berlin.

Could anybody else but Tom Hanks play Donovan? Probably not, and this part is right in his wheelhouse. He has to deal with American officials who are willing to compromise the ideals of the Constitution, and duplicitous Soviet agents trying to change the terms of the deal to their advantage. He does so with honesty, integrity and humor. He’s good, and by now we expect that from him.

Mark Rylance as Abel, though, is the real standout here. Abel doesn’t waste time with what-if scenarios, he just does his job like a true professional. He’s stoic and resigned to his fate, but like Donovan, he’s also a good man in service to his country. Rylance has made a name for himself on stage. He’s been nominated for and won numerous Tony awards, and I can’t imagine how he won’t be nominated for Supporting Actor for the Academy Awards.

The real power of Bridge of Spies is that it adheres to a sadly old-fashioned code of decency and equal justice for all under the law. We live in an era where we’re eager to justify torture in order to gain information. We yearn to deport groups of people based on their religion or the color of their skin. But we’re Americans, and we’re supposed to be better than that. Bridge of Spies tells us so.

*Still do, which doesn’t make me feel warm and fuzzy.

**Hypocrisy never goes out of style.

***I’m looking at you, Crash, Forrest Gump and The King’s Speech.

Tim Brennan
Tim has been alarmingly enthusiastic about movies ever since childhood. He grew up in Boulder and, foolishly, left Colorado to study Communications in Washington State. Making matters worse, he moved to Connecticut after meeting his too-good-for-him wife. Drawn by the Rockies and a mild climate, he triumphantly returned and settled down back in Boulder County. He's written numerous screenplays, loves hiking, and embarrassed himself in front of Samuel L. Jackson. True story.
See More Articles From Tim Brennan
Tagged: alan aldaamy ryanbridge of spiesethan coenjoel coenmark rylancematt charmansteven spielbergtom hanks
Boulder Colorado Air Quality