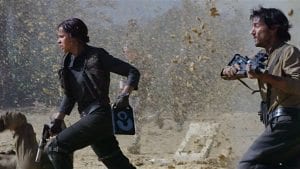 The Star Wars movies are the crown jewel of franchise filmmaking, and sometimes it’s a little hard to see why.

Look at it like this: Star Wars and The Empire Strikes Back are classics for a reason. That’s a no-brainer since they are fun, fast-paced, and chock-full of memorable characters. So far, so good. Then Return of the Jedi hits us, and it’s really just about half to 3/4 of a good movie. That’s a little bit of a bummer, but we can live with it.

After that, we have the Prequels inflicted upon us. These are the three films that almost killed the franchise stone dead. Don’t get me wrong, each movie has aspects* to recommend it, but all of them are hobbled by the same fatal flaw. Writer/director George Lucas had some good notions for expanding the Star Wars mythos; it’s just that his execution sucks. The Prequels made money, sure, but more and more of us saw them out of obligation instead of anticipation.

But last year, after the acquisition of Lucasfilm by Disney, there was cause for cautious rejoicing. We first received Star Wars: The Force Awakens, a pretty good movie that, despite being a retread of Star Wars, had some great characters and fun moments. Better yet, it was decided that we would now receive Star Wars movies every year.** Lucasfilm would alternate between the main saga involving our old favorites, and standalone films. The first of these standalones is Rogue One: A Star Wars Story, and it singlehandedly restores the prestige that has been so sorely lacking.

We know things are different right out of the gate since the traditional Star Wars fanfare and opening crawl are nowhere to be found. Instead, there’s a desolate shot of empty space accompanied by an unsettling score from composer Michael Giacchino. We meet the young Jyn Erso, living in hiding with her parents. Her father is Galen (Mads Mikkelsen), a scientist who led the design process of the cataclysmic Death Star. Galen was stricken by conscience and fled from the Empire to prevent its completion. Yet Director Orson Krennic (Ben Mendelsohn), accompanied by a detail of stormtroopers, has found them. Jyn witnesses the murder of her mother and capture of her father. She starts running.

Flash forward to years later, and the adult Jyn (Felicity Jones) has been raised by militant Rebel Saw Gerrera (Forest Whitaker). Saw is hardcore, more so than the Rebel Alliance is comfortable with. But Jyn wants no part of his, or any, mission. Too bad for her, since she’s dragged into the Alliance, and thrown together with a group of misfits. There’s Cassian Andor (Diego Luna), the semi-leader of the group who doesn’t have the luxury of morals. He’s accompanied by K-2SO (Alan Tudyk), a reprogrammed and hilariously surly Imperial droid. Along with them is Chirrut Imwe (Donnie Yen), a blind priest of the Force and enormous bad-ass, and his gun-toting protector and companion Baze Malbus (Wen Jiang). The final member of our motley crew is Bodhi Rook (Riz Ahmed), an Imperial pilot turned defector.

Their job? Simply to steal the plans for the Death Star and give the Rebels a fighting chance for survival. Piece of cake, right? Not really.

I hear some of you wailing and gnashing your teeth in rage that not only will you be watching another prequel, but that you’re seeing a story you already know the ending of. Trust me, you don’t. Rogue One is directed by Gareth Edwards, best known for his reboot of Godzilla a few years ago. Edwards was a canny choice since he has a talent for fast-paced action sequences, broad-strokes characterization, and most importantly, scale. Too many blockbusters have a mashup of CGI that feels weightless. Here, we have next-level effects work from Industrial Light and Magic. When partnered with Edwards’ eye for scene composition, we’re treated to astonishing sequences that aren’t just the best in the history of the franchise but have a reality to them. Edwards understands how to effectively use the size of a lumbering AT-AT as a contrast with the performers. With one glaring exception, this is nearly flawless effects work. But we’ll get to that exception a little later.

There’s more good news! You’re not going to be subjected to yet another film where millions were spent on CGI, and the script was written for the cost of a ham sandwich. For the most part, this is a very tightly plotted and well-written screenplay. Given that it was co-written by Tony Gilroy, who also wrote the Jason Bourne films, and Chris Weitz, who wrote the excellent About a Boy, you’re in good hands here. These gents have taken the good vs. evil tropes of Star Wars and made them grittier and more somber. Don’t worry, this isn’t quite Saving Private Skywalker. However, it definitely Force-jumps in that direction. Characters grapple with trauma and reckon with the cost of performing monstrous deeds in service of a noble cause.*** They live in a world of shades of gray.

The somewhat darker tone of the film is matched by the performances of the actors. Acting in a Star Wars movie isn’t easy. Going for a more restrained and natural approach means you blend into the scenery. You have to ride the line of a bigger and more classical approach, without getting hammy. The cast gets that. They take characters that are broad brush strokes and give them some degree of depth. Ben Mendelsohn’s Krennic is a standard-issue villain, to be sure, but he’s also strictly middle management, and he has a certain Sith Lord he needs to keep happy. As Jyn, Felicity Jones does nice work with a balance of the mythic, Joseph Campbell-esque stuff and a more three-dimensional performance. Yes, she resists the call of duty, then gradually realizes the benefits of selflessness. Really, her whole team is pulled together through the will of the Force. While they never feel like a family, they come together and put aside individual needs for the greater good.

While the film is terrific, it’s not perfect. In the first half, there are occasional stumbles in pacing, and a few scenes could have been trimmed a bit to keep things moving somewhat more efficiently. Also, remember the almost flawless effects work I mentioned? Any film dealing with the Death Star has a large problem. The character of Grand Moff Tarkin, played by Peter Cushing, is an integral part of the story. Problem is, Cushing died in 1994. The filmmakers had a tough choice. They could either omit his character entirely, try to cut around him through editing trickery, or hire a really skilled necromancer. They went with plan D, which was to create a CGI Peter Cushing. That’s a problem. Having actors perform scenes against a digitally inserted Hulk is fine. But resurrecting Cushing’s likeness through CGI is not only in slightly questionable taste, but the skill needed to create a fully convincing simulacrum of the deceased thespian isn’t quite there. In the scenes including Tarkin, pseudo-Cushing has a weird, almost rubbery quality to him. It’s very distracting, and it took me out of the reality of the moments.

You know what, though? These particular nits aren’t worth picking at too much. Rogue One is muscular blockbuster filmmaking that also has a heart and an ethical code. We don’t just have amazing world building and a third act that’s a masterclass in action cinema. We have a league of losers that realize a profound truth: there are certain things worth fighting and dying for. Even if they go down swinging, they know the Force will be with them.

*Though Attack of the Clones has a ridiculous amount of problems. Hoo boy, does it ever.

**If you’re depressed about having to live through the foul Age of Trump, at least we have yearly Star Wars movies to look forwards to.

***If you have younger kids, you may want to sit this one out, unless you’re prepared to have a fairly awkward conversation about the morality of insurgency, and how sometimes, the good guys can win and lose at the same time.

Tim Brennan
Tim has been alarmingly enthusiastic about movies ever since childhood. He grew up in Boulder and, foolishly, left Colorado to study Communications in Washington State. Making matters worse, he moved to Connecticut after meeting his too-good-for-him wife. Drawn by the Rockies and a mild climate, he triumphantly returned and settled down back in Boulder County. He's written numerous screenplays, loves hiking, and embarrassed himself in front of Samuel L. Jackson. True story.
See More Articles From Tim Brennan
Tagged: alan tudykben mendelsohndiego lunadonnie yenfelicity jonesforest whitakergareth edwardsjiang wenmads mikkelsenriz ahmedrogue one a star wars story
Boulder Colorado Air Quality