Home › Blog › History of Boulder › The Beginnings of Boulder

The Beginnings of Boulder

The story of Boulder, Colorado begins roughly 300 million years ago when our iconic Flatirons formed the seabed of the ocean that covered the better part of the North American continent. This sea, the Western Interior Seaway, ate away at the sandstone beneath it until it began to resemble the shape of the Flatirons we all know and love. 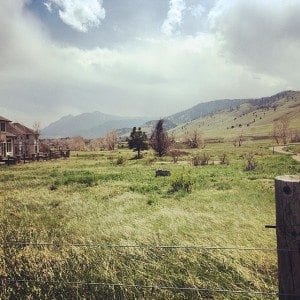 The foothills of Boulder, as seen from Wonderland Lake Park.

It was not until about 40 million years ago that the Flatirons shifted into their present position when the Rocky Mountains were created, becoming part of the “Fountain Formation.” This formation includes other spectacular Colorado landmarks including the Red Rocks Park (and, of course, the amphitheater) and the Garden of the Gods in Colorado Springs. It stretches all the way from Colorado to Wyoming.

Human beings first came to what is now Colorado roughly 13,000 years ago in the aftermath of the Ice Age Summer. In Fort Collins, archeologists have found artifacts that date from roughly 11,000 years ago that include both cultural items such as artwork and more practical ones such as arrowheads. From then on, numerous Native American tribes settled in Colorado and later, Boulder. In fact, Boulder Valley became an ideal spot for Native American tribes like the Utes, Cheyennes, Comanches, Southern Arapaho, and Sioux to spend the winter. But it is the Southern Arapaho who played a particularly key role in the development of Boulder and are the closely associated with the area. 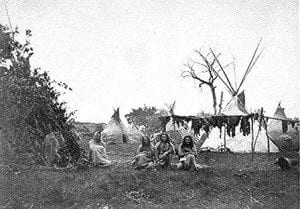 An Arapaho camp near Fort Dodge, Kansas circa 1870. Photograph by William S. Soule

The Arapaho originally lived in the Great Lakes region, but after they encountered the horse in the 18th century, they were able to disburse throughout the midwest. They traveled to Montana, Kansas, Wyoming, Nebraska, and even Colorado. The large amount of land the Arapaho were now spread across eventually caused them to split into two separate tribes: the Northern Arapaho and the Southern Arapaho. These tribes remained closely allied with one another and spoke a common language (Arapahoan, part of the Algonquian language family).

Members of the latter tribe eventually came to present day Boulder County and created a village near what is now Haystack Mountain. When the winter ended, the Southern Arapaho would return to the Great Plains to hunt buffalo, which was their primary means of sustenance. But as anyone who has spent time in Colorado during the winter knows, Boulder really is much more hospitable from November to March than the Great Plains region! Where else in the country is three feet of snow often followed by a string of gorgeous 60°F days?

One of the most famous members of the Southern Arapaho was Chief Niwot, who greeted the first white settlers to the area–and told them to leave. His story will be told next week, here on About Boulder!