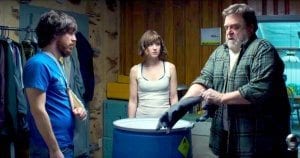 All you really need to know about 10 Cloverfield Lane is that it’s an efficient and intelligent thriller. It works best if you just go into the theater cold. In fact, you should stop reading my review immediately, trust me, and go see it.

Still here? If you’re hoping for a spoiler-riffic review, sorry, Sparky, it ain’t gonna happen. However, we can go into detail without going into detail. Let’s clear up a couple of things first. You can be forgiven for wondering if this film is a sequel to 2008’s Cloverfield. To refresh your memory, that was the J.J. Abrams-produced found footage giant monster movie. It was a fun flick that also happened to have some of the most annoying characters I’ve ever seen. You actively rooted for them to get wiped out.

When he directs or produces, Abrams likes to operate under a veil of extreme secrecy. It’s known as the Mystery Box, and he believes that the less audiences know about a film ahead of time, the more they’ll enjoy the viewing experience. To a degree that’s true, but we live in an age where audiences complain that they never see anything new, yet they refuse to take chances. One of the amazing things about 10 Cloverfield Lane is that nobody knew the film even existed up until a few months ago.

We meet Michelle (Mary Elizabeth Winstead), fleeing her marriage after something has happened between her and her husband. She’s in her car, driving who-knows-where when she’s blindsided by another car. The accident is bad, bad enough to knock her unconscious. She wakes up on a mattress in a concrete cell, her wounds having been dressed. She’s in an underground bunker owned by Howard (John Goodman), a farmer and conspiracy theorist. With a gun on one hip and omnipresent key ring on the other, he tells her that an “event” has occurred.

Howard explains that some kind of attack took place on the surface, and the air is now radioactive. Who caused it? Maybe the Russians, North Koreans, or possibly Martians. Whatever happened, Michelle is told that the air will not be breathable for one to two years. But isn’t she a lucky duck since doomsday prepper with a heart of gold Howard rescued her from her car wreck? His bunker has plenty of food, breathable air, and padlocked steel doors. Michelle learns that Emmett (John Gallagher Jr.) is also down there, whom Howard is less than thrilled with. Emmett has known Howard for years, seen him building his bunker over time, and he fought his way in at the last minute.

What’s really going on? Is Howard telling the truth? What’s his endgame? The good news is, Michelle is definitely smarter than the average bear. From the moment she awakens in the bunker, we see her taking in all the details, filing them all away and developing a plan. So many mainstream films have characters that are simply two-dimensional plot devices. Not here. Our three characters, in their own individual ways, are all fully realized individuals. We see their strengths and weaknesses, and they all feel like they have genuine inner lives.

This is the feature film debut of director Dan Trachtenberg, and it’s highly impressive. First, if you’re worried that the shaky-cam aesthetic from Cloverfield has made its way here, relax. Along with cinematographer Jeff Cutter, Trachtenberg has made a film that’s clean, almost classically so. If it were shot in black and white, it would feel right at home on Alfred Hitchcock Presents. Plus, he does great work communicating the geography of the bunker. After the film gives us a brief tour, we always know where everyone is in relation to everything else. He’s helped by an economical script written by Josh Campbell, Matthew Stuecken, and Damien Chazelle.

The film is also a solid acting showcase. I feel a little bit bad for John Gallagher Jr. since he’s acting between two other performers who give next-level performances. while he’s just really good. Emmett is the least meaty role in the script and Gallagher shades in some ambiguity and passive-aggressive behavior towards Howard. John Goodman is a film icon. We all love him, but he’s an actor that gets taken for granted sometimes. As Howard, he takes the survivalist cliche and introduces interesting layers. There’s something profoundly wrong lurking behind Howard’s eyes and a scene where the three of them play a game shows some alarming misogyny. But underneath that madness are glimpses of a man who may have been kind.

The MVP of the film is Mary Elizabeth Winstead, without a doubt. She brings probing intelligence to her roles, and she makes Michelle a woman with a gift for improvisation and keen attention to detail. Howard is a formidable obstacle for her to go up against, but Michelle is just as tough. I love movies where characters have to think their way out of bad situations, and while Michelle gets a little too MacGyver occasionally, she keeps making the right choices, even if they don’t always work.

So is 10 Cloverfield Lane a sequel to Cloverfield? The answer is…maybe? A little? If anything, it’s more a spiritual sequel, given that both films share some thematic connective tissue, though you kinda have to reach for it. Since we’re experiencing the events from Michelle’s point of view, there’s room for ambiguity. The third act takes a hard left turn, and it’s going to be the subject of a lot of discussions. The script was originally titled The Cellar, and it was retrofitted to serve as another chapter in the Cloverfield mythos. It’s a little shaky in terms of narrative, but it ultimately works due to the confidence of the filmmakers and Winstead reacting the way most of us would.

My gut tells me that J.J. Abrams is trying to set up an anthology series here. I’m fine with an expansion to the Cloverfield universe, as long as it’s done with this level of quality and intelligence. Trachtenberg has made a film that’s a solid crowd pleaser, and we can’t ask for more than that.

Tim Brennan
Tim has been alarmingly enthusiastic about movies ever since childhood. He grew up in Boulder and, foolishly, left Colorado to study Communications in Washington State. Making matters worse, he moved to Connecticut after meeting his too-good-for-him wife. Drawn by the Rockies and a mild climate, he triumphantly returned and settled down back in Boulder County. He's written numerous screenplays, loves hiking, and embarrassed himself in front of Samuel L. Jackson. True story.
Tagged: damien chazelledan trachtenbergjj abramsjohn gallagher jrjohn goodmanjosh campbellmary elizabeth winsteadmatthew stuecken