The Mystery and Majesty of Boulder’s Saddle Rock Trail

Gregory Canyon’s trailhead has seen better days. Currently, it’s actually in the process of seeing better days, because construction vehicles are finally beginning to rebuild the road that was destroyed in last year’s floods. I hadn’t been in the Gregory Canyon area since before Boulder‘s big flooding incident, so this road was quite a shock to me, but it was merely foreshadowing what was yet to come on the trail.

The Saddle Rock trail looks quite a bit different since the floods. The flooding paved a huge riverbed through the forest area, leaving behind all of the bits n’ bobs of nature that the floods transported down the mountain. In the picture below, I found a particular example of a tree that probably didn’t take too kindly to the floods. Even though I knew the floods destroyed the trail, it was still interesting to see the story that the trail had to offer. After glancing at the rocks and the logs for a few minutes, I got a better idea of how the flood flowed through this area. The rocks and the logs were like pieces of a puzzle that eventually gave me a better picture of what this area looked like during the full force of the floods. You can always assess how strong a flood is based on the sizes of rocks that it carried down. The rocks in this area were pretty large, which indicated that the floods were pretty powerful. 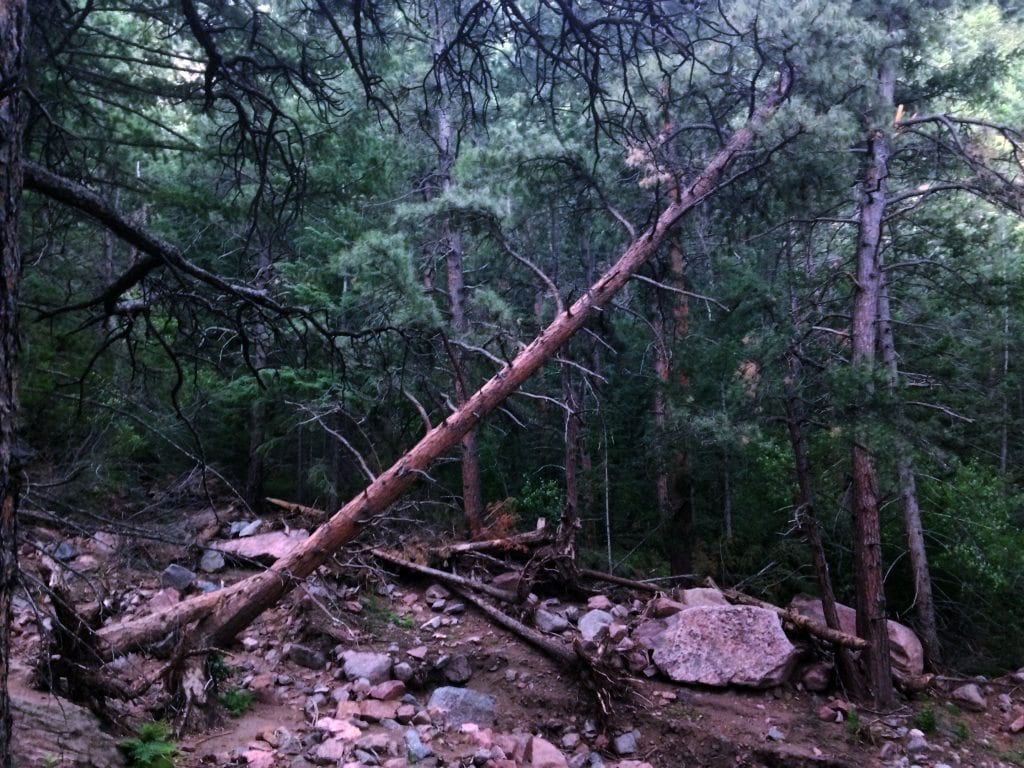 The remains of the flood act as a key to the past and give hikers a better idea of how much force the floodwaters had when they were barreling down the mountains. It was quite a spectacle to see! Once my hiking partner and I got out of the forest, we continued to get more amazing views of the natural landscape. We went to the top of a small rocky peak to get a better glimpse of the mountains around us, and we got an incredible view of the first flatiron’s back end. Even on a stormy day, the views were still breathtaking. 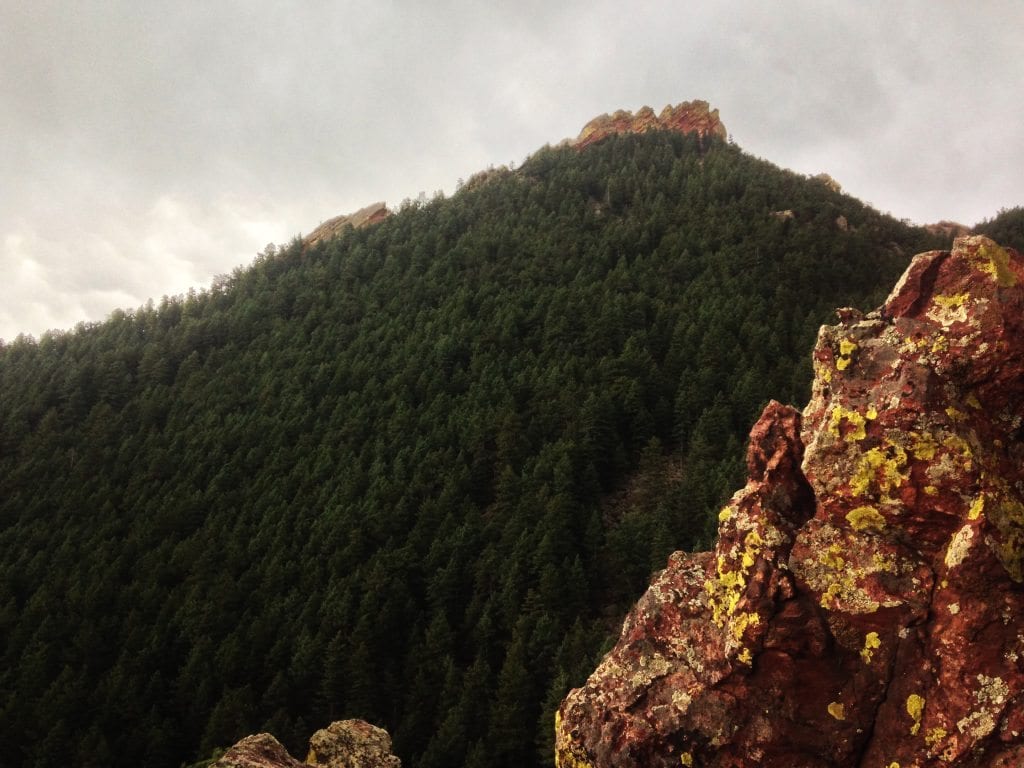 We decided to hike up a little further along the trail and we actually reached a point where we encountered a ladder. The particular part of the trail was carved away by the floodwaters and the ladder was put in place so people could still access the remainder of the trail. While my hiking partner started to head up the ladder, I decided to snap another picture of the trail. It’s hard to have self control with a camera when you’re surrounded by such immense beauty! 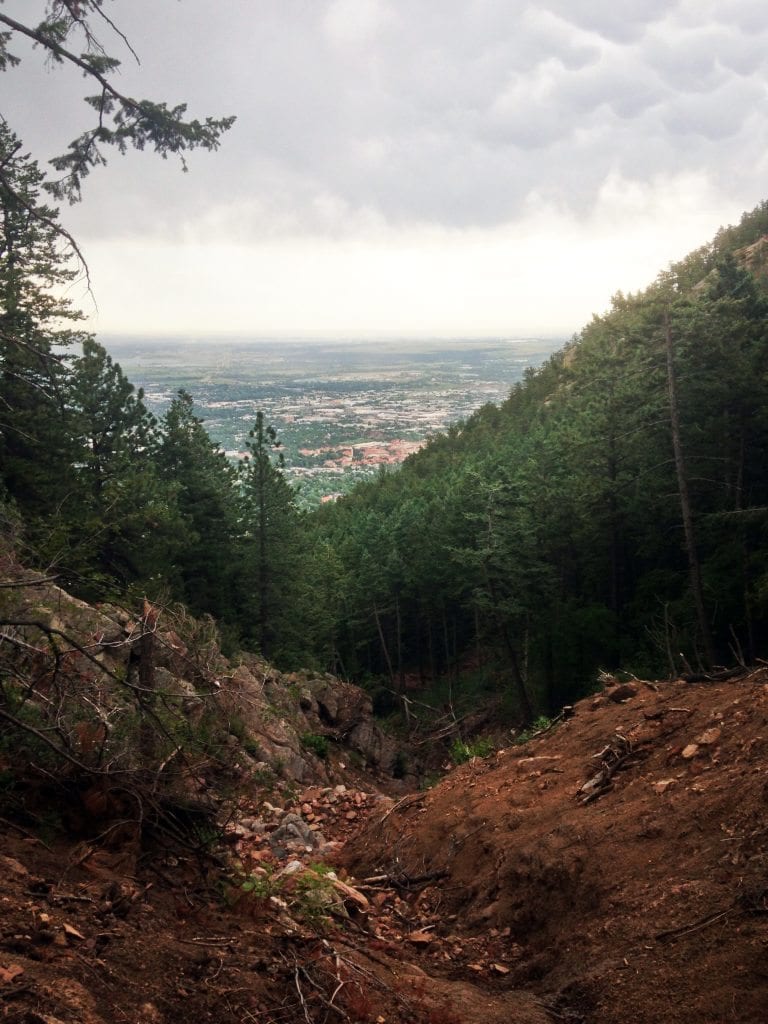 As we progressed along the trail, the clouds cleared up and we found considerably less flood damage at the top. We had finally hiked past the flood’s major spillway, which had been right next to the trail for most of our trip until we got past the ladder. We eventually got to Saddle Rock and the weather decided to clear up just before we got to the top, giving us some pretty remarkable views of Boulder. It was a great end to a great hike, but I think my favorite part of the entire experience was getting to see the flood damages in the forest. It’s always interesting to look at the aftermath of Nature’s wrath, especially when it’s as substantial as the floods that happened last October. 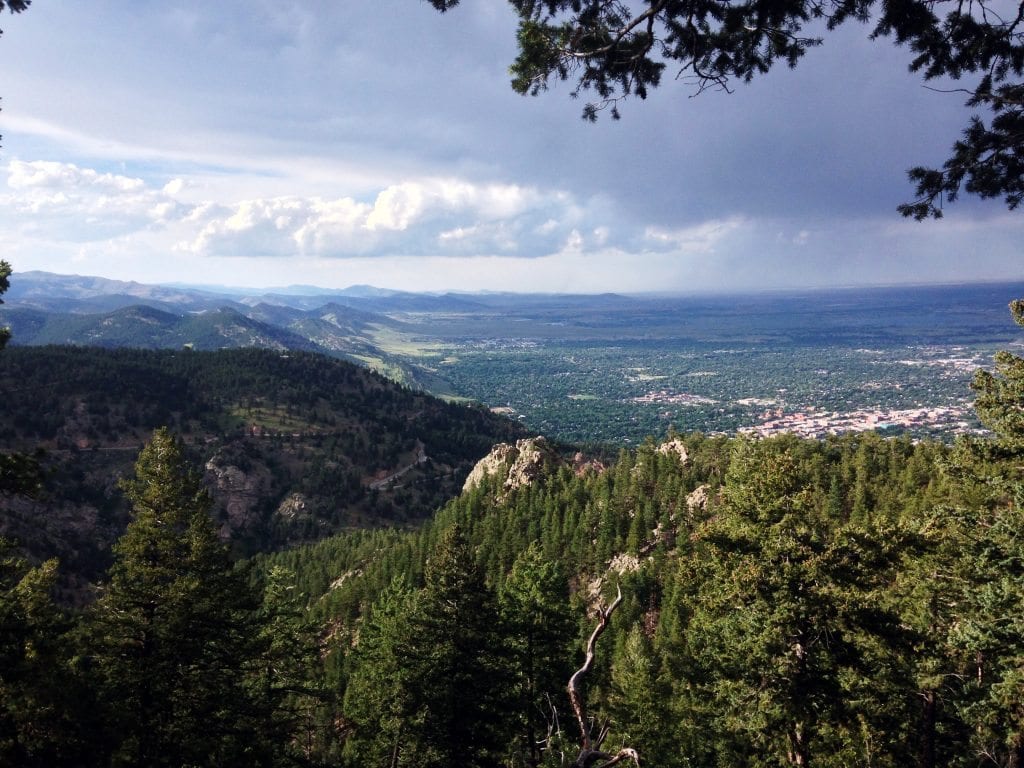 For anyone that wants to find these incredible views of Boulder or simply wants to investigate the flood’s damages, I cannot recommend the Saddle Rock trail enough. Even though the main road to get to the trail is currently out of commission, you can access the trail by parking on the western end of Baseline road and  by taking the Baseline trail to Gregory Canyon’s trailhead. The Saddle Rock trail will be the path that splits off to the left side of the river.