The Name Is Bland. James Bland. 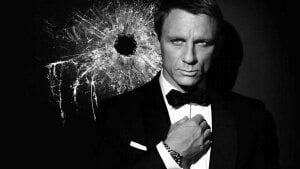 Ready for a surefire way to start a fistfight? The next time you’re in the midst of a conversation, with great conviction, state the name of your favorite actor to play James Bond. Tell whoever is listening that your choice is clearly the closest approximation to what Ian Fleming had in mind when he created his gentleman spy.* No matter who your choice is, someone will eventually scoff at it and offer their pick. Your job is to roll your eyes and reply with some variation of, “Well, he tried.” Continue this until someone throws a punch.

Since 1962, 6 men have played Bond, with varying success. It started with swinging he-man Sean Connery, who created most of the building blocks of the role. Luckless male model George Lazenby played Bond a single time before he was replaced by merry fop Roger Moore. After Moore’s departure, Bond was played twice by the dead-eyed Timothy Dalton. Dalton nearly succeeded in destroying the franchise, but it was saved from the abyss by Teflon-coated Pierce Brosnan. The franchise was re-reinvigorated by the entertainingly thuggish Daniel Craig, and Casino Royale, Craig’s maiden voyage as Bond, is arguably the best Bond film made yet.**

We’re now treated to Spectre, the twenty-fourth installment in the franchise. The production was wildly expensive, costing between $300-$350 million. It was also a stressful nightmare for everyone involved. causing Daniel Craig to mention in an interview that he’d “slash my wrists” before playing Bond again. As a result, while Bond’s newest adventure isn’t the worst film,*** it is uneven.

Things start strongly, with a dynamite opening introducing Bond in Mexico City during Day of the Dead. It’s filmed in one long take, as we land on Bond and follow him through the streets, into a hotel lobby, up an elevator, into a hotel room, and out onto the rooftops where 007 pursues his prey. The sequence is almost completely pointless, but it’s so slick and exciting that it doesn’t matter. But the first problem area is the lousy title song, “Writing On The Wall,” by Sam Smith. It’s accompanied by an unsettling title sequence that appears to be linking Bond to the Cthulhu mythos.

From there, Bond globetrots to Rome, Austria, and other glamorous locations to uncover the secret behind the worldwide criminal network SPECTRE. He’ll briefly encounter and bed the gorgeous Lucia (Monica Bellucci), do battle with the mute henchman Hinx (Dave Bautista), and fall for Madeleine (Lea Seydoux). Ultimately, he’ll face the head of SPECTRE, Oberhauser (Christoph Waltz) and discover a connection that the movie thinks is shocking, but that people with a brain will spot coming a mile away.

While he’s bouncing from country to country, his boss M (Ralph Fiennes) must deal with Denbigh (Andrew Scott), who runs the Combined Intelligence Service. Denbigh wants to retire the OO section and replace them with drones. Moneypenny (Naomie Harris) and Q (Ben Whishaw) are naturally along for the ride. All of this gives us a Bond movie that’s 2 and 1/2 hours long. No Bond movie should ever be 2 and 1/2 hours long.

Before we wade in and start trashing Spectre, let’s talk about what works. Primarily, it’s the Daniel Craig show, and Craig has put his own indelible stamp on Bond. He has given the character the most vivid inner life, and his Bond shows flashes of cheeky wit. He shares a couple of terrific action sequences with Dave Bautista’s Hinx, including an extended fight in a train that’s a true show-stopper. Director Sam Mendes, returning from the previous Bond film Skyfall, has made a film that at least looks great, and the supporting cast (for the most part) is fun and capable.

But there are a few massive flaws that nearly bring down the production. First of all is Monica Bellucci’s role, which is essentially a glorified cameo. She’s the widow of a murdered man, and Bond meets her at the funeral, extracts information from her, then sleeps with her in a clumsy and unearned seduction. It’s a shame, because, at fifty-one years of age, Bellucci remains outlandishly gorgeous and is an age-appropriate match for the forty-seven-year-old Craig. It doesn’t hurt that the two of them have chemistry that’s absolutely electric.  Apparently a woman around that age isn’t allowed to be sexy, because Bellucci’s character vanishes after six minutes, never to be seen again.

Instead, Craig is paired up with the thirty-year-old Lea Seydoux. They’re both good actors, and we’re told that these two should have chemistry to burn. Not so much, since weird editing choices neuter their energy. In fact, Seydoux is underserved by a dumb script that tells her to fall in love with Bond just because it’s time for her to do that.

Be warned, for I will be treading into spoiler territory in the following few paragraphs.

The screenplay, written by John Logan, Neal Purvis, Robert Wade and Jez Butterworth is sloppy as hell. So much so that it shoves a giant middle finger in the face of an iconic villain. As you’ve probably guessed, Oberhauser is really the famed Ernst Stavro Blofeld. We are told that Bond and Blofeld are foster brothers. We are told that Blofeld killed his own father since he was jealous of the bonding that took place between his dad and Bond. We are also told that Blofeld orchestrated the events of the previous three Bond movies, an attempt by the filmmakers to ape the interconnectedness of the Marvel movies.

The problem is, we’re told all this in an airless monologue by Blofeld. Not only is it logically impossible, it’s narratively unsatisfying. The preceding films have no clues to suggest this conspiracy, and there’s no moment where the threads are strung together and Blofeld explains the intricacies of his plan. He just generically wants revenge and, worst of all, Bond doesn’t seem to care all that much. Poor Christoph Waltz spends so much time as Captain Exposition that he’s never allowed to create a distinctive villain.

Despite Craig’s threats of self-destruction, he’s under contract for one more turn as oo7. For most of the actors playing Bond, their final film tends to suck pretty hard. Look at the terrible Licence To Kill, or the enthusiastically stupid Die Another Day. Craig has one last chance to beat the odds with the 25th adventure. The phrase, “James Bond Will Return” is at the end of the credits. Let’s hope it’s a promise and not a threat.

**You could make a pretty good argument for Goldfinger in the number one spot.

***That would be A View To A Kill. Not even the mighty Christopher Walken can save the movie from stinking up the joint. Good theme song, though.

Tim Brennan
Tim has been alarmingly enthusiastic about movies ever since childhood. He grew up in Boulder and, foolishly, left Colorado to study Communications in Washington State. Making matters worse, he moved to Connecticut after meeting his too-good-for-him wife. Drawn by the Rockies and a mild climate, he triumphantly returned and settled down back in Boulder County. He's written numerous screenplays, loves hiking, and embarrassed himself in front of Samuel L. Jackson. True story.
See More Articles From Tim Brennan
Tagged: christoph waltzdaniel craigdave bautistalea seydouxmonica bellucciralph fiennessam mendesspectre