Why’s Boulder so Great for Start-ups?

The Ewing Marion Kauffman Foundation, based in Missouri, found that Boulder Colorado had the highest density of start-up companies per capita in the United States. Most of these sprouting businesses are technology-based, and many start and eventually settle in the city. But what is it about Boulder which makes it a breeding ground for new business?

First of all, Boulder‘s culture spans the distance between nature-loving outdoorsy people and highly-educated tech creators. To the west are the glorious Flatirons and innumerable natural wonders, meanwhile the university is researching more ways to get their alumni into space. This intriguing combination of closeness with nature and intimacy with science plays a huge part in Boulder‘s ability to generate technological start-ups.

Richard Florida, author of The Rise of the Creative Class (2002), lays out 3 vital components of a creative city: talented people, technological expertise, and open-mindedness. CU Boulder and the city’s reputation as a creative place brings in tons of talented folks. These people stick around due to the natural beauty of the area and the interconnected and creative culture here. Tech expertise is also due to CU, but also from businesses in the area, like IBM, which is Boulder‘s largest employer. And open-mindedness goes without saying. Boulder features a culture unafraid to try doing things differently, and that’s a must-have for new business models. 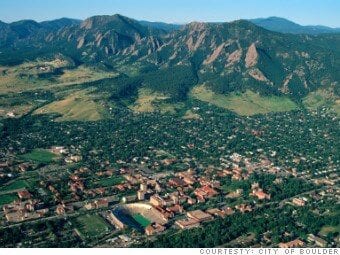 Another advantage of Boulder is it’s smaller size. The green belt around the city limits its size and population. A familiar derogatory quote regarding this: “Boulder is 25 square miles surrounded by reality” hits the nail on the head. The city cannot exceed its current span, and the limited population creates a permanent “big fish in a small pond” setting for incoming tech entrepreneurs. Making a tech start-up here means that you get a tight-knit community of skilled and open-minded people to work with. This is an inviting atmosphere for young companies.

The fixed size of Boulder also means that new tech companies do not deal with excessive congestion or flooded markets in the same way a larger city does. The cost of beginning a company in the tech industry is also lower compared to traditional brick and mortar businesses. This means start-ups can avoid the steep land prices in Boulder and focus their attention where they want.

Unfortunately, Boulder has wealth enough to give many businesses a strong start, but there is not enough venture capital available to really make them take off. Small ponds are a tradeoff. Boulder is not “corporate” like Silicon Valley is, but Boulder cannot supercharge a business like Silicon Valley can.  This is the “reality” mentioned earlier. Boulder is a wonderful place to start a new tech company. Web-based businesses can thrive here. However, something integrating physical products or services into its business model will probably grow too large for this little pond and have to migrate elsewhere.

Joe Inclan
Originally from Lone Tree, CO, Joseph Inclan graduated from Regis Jesuit High School in 2010. He applied to just two universities, DU and CU Boulder, and was accepted by both. Joe chose CU for its beauty, and the appeal of the open-minded and quirky city ensured him how right he was to choose Boulder. With a Bachelor’s degree in both English Creative Writing and Philosophy from CU, he has dabbled in everything from poetry to basic technical articles for 3DPrintingIndustry.com. His hobbies have a range too, from fountain pens and handwriting, to yoyos and skill toys. The most important thing for Joe is to understand things complexly. Boulder and its residents live in an evolving miasma of ideologies and cultures which demand more than a 2-Dimensional perspective. Joe’s fascination with Boulder stems from the fact that it is far more than the sum of its parts, and that is a unique quality. He is glad to be a writer with AboutBoulder.com and looks forward to spreading his knowledge of Boulder with the community.
See More Articles From Joe Inclan
Tagged: About BoulderaboutboulderABOUTBoulder.comboulderboulder coloradoBoulder CountybusinessCollegeColoradocommunityCUgoogleIBMInspirationlocaloutdoorsstart-upstart-upsstudentsSuccesstechTechnology
Boulder Colorado Air Quality