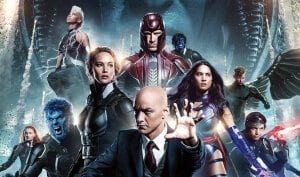 In 1995, I saw The Usual Suspects in Denver. I was 20, a callow young punk, not even old enough to drink legally. Like most people that age, I was dumb as hell, not even smart enough to know how little I knew. However, walking out of The Usual Suspects, there were two things I knew for sure. It was an instantly iconic film and the guy who made it was one to watch.

That guy was Bryan Singer, and for a while there, he made some genuinely interesting stuff. The Nazi-in-suburbia thriller Apt Pupil. Tom Cruise as a heroic German in Valkyrie. The Man of Steel as a creepy stalker in Superman Returns.* Singer was part of the initial vanguard of Marvel characters being adapted for the screen. His X-Men, which was released 16 years ago, was a massive risk on the part of 20th Century Fox. With the exception of emotionally stunted nerds like me, nobody knew who these characters were.

But X-Men was a hit, a pretty freakin’ big one, and it opened the floodgates. It helped to usher in the rise of Marvel Studios, a sometimes vicious rivalry with 20th Century Fox,** and thousands of thinkpieces about superhero fatigue. Singer directed the pretty okay X-Men: Days of Future Past in 2014. Now he’s returned with X-Men: Apocalypse, and it almost seems like he’s trying to destroy the genre that he helped create.

We begin with a mysterious ritual in ancient Egypt. En Sabah Nur (Oscar Isaac) is the world’s first mutant, and he’s developed a way to gain immortality and a host of superpowers. How? Why, science, silly! He’s trapped in the collapse of a pyramid, and we flash forwards to the heady days of 1983. His reputation definitely precedes him, and a group of worshipers frees him. Why do they free him? Because that’s what worshipers do, duh. Now looking like a Smurf after a bad 6 months in Tijuana, En Sabah Nur gathers four mutant acolytes to serve as his Four Horsemen. Why does he need Four Horsemen? Because The Bible. His henchpeople are the weather controlling Ororo/Storm (Alexandra Shipp), psychic ninja Psylocke (Olivia Munn), the metal-winged Angel (Ben Hardy), and one other.

That would be Erik Lehnsherr/Magneto (Michael Fassbender). After wrecking RFK Stadium in the previous film, Magneto has gone into hiding. He’s now a simple factory worker in Poland, with a loving wife and daughter that’s cute as a button. If you guessed his family would be slaughtered and he’d return to mutant supremacy, congratulations, you know what a cliche is! En Sabah Nur has a poorly thought out plan to wipe out humanity and enforce mutant Darwinism, and Magneto goes along with it because the script commands him to.

Meanwhile, our antiheroine, the shapeshifter Mystique (Jennifer Lawrence, contractually obligated to be here and showing it), is decidedly not out and proud. She’s in hiding and on a vague mission to free captured mutants, and she reluctantly partners with Teutonic teleporter Nightcrawler (Kodi Smit-McPhee). They get wind of En Sabah Nur’s dastardly plan and seek out the help of Charles Xavier (James McAvoy), telepath and founder of the Xavier School for Gifted Youngsters. They will visit the Canadian wilderness and the Weapon X program. They will do battle amidst unnecessary amounts of CGI. I will sigh repeatedly and wish I had watched Captain America: Civil War instead.

As you may have gleaned, this is not a good movie. But, gentle reader, before grabbing your pitchfork and howling for the end of the superhero genre, I should first mention that this is not a tipping point. We have Suicide Squad out in August and Doctor Strange out in November, both of which look pretty darn good. Instead, X-Men: Apocalypse is a response from 20th Century Fox trying to compete with the meteoric success of Marvel Studios and a reaction by Bryan Singer to seemingly losing his mojo.

Why are Marvel Studios the only ones that have cracked the peculiar alchemy of making good superhero cinema? Simple, they respect their characters. While they’re not slavishly devoted to the fidelity of the comics, they know that by honoring the essences of their heroes, audiences will come out in droves. Historically, Fox has not been quite as concerned, and this film is one more shred of proof.*** Here, recognizable human motivations are more of a guideline than a rule, and with the exception of the idealistic Xavier and the rage-driven Magneto, most of the characters are defined by what they can do instead of what they want to do. The thought seems to be that, by cramming in scads of heroes jumping, blasting, and waving their arms in the air frantically, viewers will either respond positively or be beaten into submission. Either way works.

Then there’s Bryan Singer. He was able to effortlessly juggle a cast full of charismatic scumbags in The Usual Suspects. Here, not so much. Characters get introduced, then the film forgets to give them something to do. He was able to insidiously ratchet up tension in Apt Pupil, but here, he’s mostly lost his command of tone and his ability to keep the story moving efficiently. It feels dull, lifeless, and even scenes of destruction porn don’t give us the vicarious thrills they should. As bad as Batman v. Superman was, it was made by someone with a vision. It was a violent, stupid, and cruel vision, but it was a vision all the same. Singer has no vision here. He doesn’t seem to give a damn. Plus, how perverse do you have to be to take a performer as charismatic as Oscar Isaac and bury him, along with his energy, in prosthetics?

Singer isn’t helped by the script. Along with Simon Kinberg, Michael Dougherty, and Dan Harris, he has co-written a scenario that includes the X-Men, not a story. What do the characters think about all of this? How do they feel? The X-Men are a perfect metaphor for feeling different. If you were a black kid in an all-white school, a lesbian in a socially conservative town, a woman in a predominantly male workplace, you could relate. Anyone could relate. They were characters that had every reason to lash out at those who discriminated against them, yet didn’t. They protected a world that hated and feared them, but in X-Men: Apocalypse, that wonderful metaphor is paid the most shallow lip service. Instead, these could be any generic group of superpowered individuals battling a world-ending madman.

So does all that mean that the film is a complete mattress fire? No, and that’s the frustrating part. A sequence where Quicksilver (Evan Peters) rescues students at lightning speed from an explosion is set to “Sweet Dreams (Are Made of This)” by The Eurythmics. It’s clever, exciting, and funny. It’s also only three minutes long. Michael Fassbender continues to prove he’s one of the most gifted actors on the planet by offering a performance that’s nuanced and layered, and James McAvoy’s louche Xavier is a mentor, but one with appetites and an inner life. There are a few moments that give these characters life, and remind us that Bryan Singer was once a cinematic force to be reckoned with.

Many people have thought that this is the moment for Marvel Studios to take back the X-Men and restore them to the glory that they deserve. I thought that, too. But folks smarter than I made an interesting point. They opined that Marvel doesn’t need to be the only game in town when it comes to superheroes. If the right passionate people were in charge of the X-franchise, they could explore the massive untapped potential and spur on some healthy critical and commercial competition. They’re absolutely right. Somebody get the Wachowski Sisters on the phone. Please.

**To stave off bankruptcy in the 90’s, Marvel Comics sold off the film rights to many of their most popular characters. Since the success of Iron Man and the rise of Marvel Studios, bringing the X-Men “home” has been a high priority. But the X-Men have been one of Fox’s prized franchises, and they cling to the license with Gollum-like intensity.

***This was the same studio that wanted to transform the tormented and blind crusader Daredevil into an extreme sports aficionado. When you give people with business degrees creative control, that’s what you get.

Tim Brennan
Tim has been alarmingly enthusiastic about movies ever since childhood. He grew up in Boulder and, foolishly, left Colorado to study Communications in Washington State. Making matters worse, he moved to Connecticut after meeting his too-good-for-him wife. Drawn by the Rockies and a mild climate, he triumphantly returned and settled down back in Boulder County. He's written numerous screenplays, loves hiking, and embarrassed himself in front of Samuel L. Jackson. True story.
See More Articles From Tim Brennan
Tagged: alexandra shippbryan singerevan petersjames mcavoyjennifer lawrencemichael fassbendernicholas houltoscar isaacsophie turnerx-men apocalypse
Boulder Colorado Air Quality