This past year, states all across the nation have been significantly increasing the percentage of renewable energy that they are aiming to achieve. On this past Wednesday, the 7th of October, new renewable energy goals for California were signed into law by Gov. Jerry Brown. The San Francisco Gate reported on the event. This bill requires that “by the end of 2030, half of California’s electricity will come from the wind, the sun and other renewable sources under a new law that sets one of the country’s most ambitious clean-energy targets”. 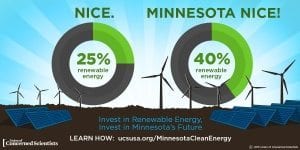 “UCS is now working to increase [Minnesota’s] current 25 percent-by-2025 renewable energy standard to 40 percent renewables by 2030″. – Courtesy of the Union of Concerned Scientists

Some other states that have done so already this year include Hawaii and Vermont. “Hawaii passed legislation calling for 100 percent renewable electricity by 2045, while Vermont set a requirement of 75 percent renewable power by 2032”. It has proven more difficult for states such as California to set as high goals as Hawaii or Vermont primarily because California has a larger population, greater energy demands, and greater influence from the oil industry.

California is the most populated state in the country and yet “only a few of the [other states’ goals are] higher than California’s”. This is very impressive for a state that is the third-largest oil producing state in the United States. There are both democrat and republican supporters of the oil industry in California because of its large oil production, which is why “the law no longer contains one of its most important original provisions, which called for slashing the state’s oil use in half”.

As Gov. Brown exclaimed at the signing ceremony, “We’ve got to realize that we are here today because of oil — oil and gas, to a lesser extent, coal.” Brown also said, “What has been the source of our prosperity has become the source of our ultimate destruction, if we don’t get off of it.”

The push for heightened renewable energy goals across the nation is a sign, that this is an effective way of combating climate change and transitioning to a more sustainable society. “[This bill] accelerates California’s shift away from fossil fuels as its dominant source of energy and marks another milestone in the state’s fight against climate change”. As other states continue to push for more renewable power, perhaps it is a sign that Colorado could farther increase its clean energy goals.