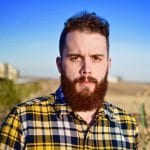 “People have been surprised to find out that I’m gay. Is it based on how I talk? How I dress? Some parts of my personality fits into the perceptions of gay men, like caring about dressing ‘nice’… But what does that actually mean? Sometimes I wonder where I fit in. Am I a portrayal of gay culture?… I’m a gamer. I’m a graphic designer. I live for music. I’m a basic nerd. I am me.” -Dean Dean is a graphic designer originally from Alaska.  Read More

On Monday, October 27th, pilot Steven Moore’s single-engine plane crashed and burst into flames after taking off from Boulder Municipal Airport. According to an official statement, Moore unfortunately died in the crash. Steven Moore, who was an experienced pilot, was a role model for many people. He helped hundreds of young pilots make their way through in the aviation industry as the executive director of the National Gay Pilots Association and also served as a pilot for ExpressJet Airlines. The NGPA is an organization that supports diversity in aviation and fosters equal treatment... Read More