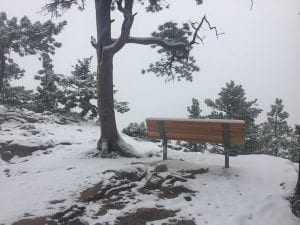 It finally snowed! It’s already mid November and Thursday was the first snow fall we’ve had of the year here in Boulder. For a while there, I was starting to get concerned that global warming was at fault and it was never going to snow, but here it is! Being prepared for Colorado weather is tricky sometimes. On Wednesday it was sunny and close to 80 degrees and on Thursday we woke up to a blizzard. I have a friend who had to walk in the snow with just Teva sandals on because, like everyone else, she had no idea we were going to get this much snow so quickly. What a difference a day can make.

Now that it snowed, the holidays can really begin. Seeing Christmas commercials on TV without there being any snow on the ground just felt wrong. To me, snow is the kick off of the holiday season. When it first starts to snow, I feel like there is something to look forward to, like snow is the start of something new (aside from the season changing). I’m really close with my family so spending time with them during Thanksgiving and Christmas, the two most family oriented holidays of the year, is what makes me the most excited about snow. I also love the cozy feel that winter brings—warm drinks in front of a fire while snuggling with someone. The set of activities that come with winter, such as ice skating, sledding, skiing/snowboarding, snowshoeing etc. make this season really fun. The only downfall about snow for a college student is walking to class in it. Now that I am a senior, my motivation to go to class is already low so adding snow to the equation might result in me skipping a lot (oops!). However, I wouldn’t want to spend the winter/holiday season anywhere but Colorado because it is truly one of the most beautiful places in the country.

Lily Lemire
Lily is a senior at the University of Colorado at Boulder and will be graduating with a Bachelor of Arts in Film Studies along with a certificate in Business. She is originally from Scarborough, Maine, but decided to venture to Colorado for it's beauty and to get back in touch with her birth place which is Boulder. She is a Film Studies major because she is very interested in the behind the scenes of what goes into making a film. Not only that, but her favourite hobby in the world is to watch movies. She recently went abroad to Sydney, Australia to get a taste of a different culture. While being there, she learned to not take life too seriously, and to slow things down. The Australian lifestyle can really teach a person how to be chill. You can find Lily at the movies, hanging on Pearl Street having a beer with friends, or at the breathtaking lookout of Flagstaff enjoying the view.
See More Articles From Lily Lemire
Tagged: