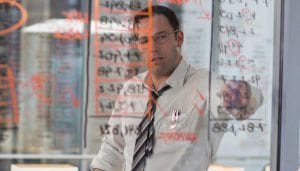 In the end, it’s all about the buy in. Maybe you can accept a grown man running around in an American flag costume smashing people in the face with an indestructible shield. Perhaps you absolutely can’t accept that, yet you’re okay with a Catholic married couple who are also ghost hunters. You might have a positive or negative reaction to a trailer. You might even hear just the premise of a film, and you make a split-second decision.

It’s hard to say what we’ll accept when it comes to movies. My good friend Devila loudly and unapologetically scoffs whenever she sees a trailer for a Marvel movie, but she is down when it comes to Star Trek. Most of us know what we like pretty quickly. However, there’s something special about seeing a film that you initially wrote off, and realizing early on that it’s far better than you anticipated. The Accountant is the perfect example of this.

There was a specific moment early on when I realized I’d dig the film. Christian Wolff (Ben Affleck) runs a shabby accounting firm in a run-down strip mall. He’s helping a kindly rural couple do their taxes. The wife makes her own jewelry and asks Christian if he likes her necklace. As only someone on the autism spectrum can, he insults her, then immediately helps the couple realize they can treat her jewelry making business as a sizeable tax deduction. Right then, I willingly bought into everything.

There’s more to our accountant than thoughtless insults aimed at gormless hicks. His name isn’t really Christian Wolff, or Lou Carroll, or any of the other aliases he uses. His business isn’t just a bargain basement H&R Block. Rather, he has a more specialized clientele. When mobsters, drug lords, and their unsavory ilk find out they may be getting ripped off, they need a forensic accountant to uncook the books. Pretty good work if you can get it. The Treasury Department has heard whispers of this mysterious accountant, and agent Ray King (J.K. Simmons) wants him. But Ray has run into a brick wall in his investigation. He needs a fresh pair of eyes, and he drafts Medina (Cynthia Addai-Robinson) to track the shadowy money man down.

The heat, as they say, is on. The mysterious British woman that coordinates Christian’s gigs suggests a legitimate assignment. A cutting-edge prosthetics company headed up by Lamar Black (the mighty John Lithgow) has run into some financial irregularities, discovered by Dana (Anna Kendrick), one of the firm’s accountants. The plot, as they also say, thickens, as Christian and Dana are plunged into a deadly conspiracy. They must deal with a talkative hitman played by the always welcome Jon Bernthal. We also get hints of Christian’s childhood, where his father makes the questionable decision to treat his son’s autism by taking him to Indonesia and having martial arts instructors beat the hell out of him.*

When I first saw the trailer for The Accountant, the idea of an autistic financial expert engaging in almost John Wickian levels of ass-kickery struck me as so dumb, you could hear the clattering as I rolled my eyes. Foolish critic! Our boy Affleck majorly course-corrected his career a few years back and now, whether he’s acting, directing, or both, he’s usually the mark of quality. Matter of fact, he’s got a better batting average lately than his BFF Matt Damon.** His performance here is excellent, and he locks down his usual mannerisms and offers a disciplined and controlled portrayal. Is it accurate? I’m not sure, but it feels real, and it feels sensitive. There’s no spectrumsploitation to be found here.

He’s surrounded by a murderer’s row of excellent character actors. Everybody’s firing on all cylinders, with Jeffrey Tambor playing Affleck’s beaten-down mentor, Bernthal’s entertaining fix-it man, and the always excellent J.K. Simmons. Anna Kendrick and Affleck don’t have much in the way of chemistry, and my only real complaint is that it’s a bit of a waste to cast an interesting actor like Kendrick, then don’t give her much to do beyond gaping in astonishment.

No matter, since there’s an awful lot of good here. Director Gavin O’Connor has made a slick and well-paced thriller. I appreciated his willingness to slow things down a bit for character development, and he never lets it grind to a halt. He’s aided by an intelligent and nimble screenplay from Bill Dubuque. It’s almost as if someone told Dubuque that a financial thriller would be boring, and he arched an eyebrow and responded with, “We’ll see about that.”

The Accountant is a rare bird, indeed. It’s not based on a novel, video game, or graphic novel. It isn’t trying to set up a massive franchise, and it’s made for a modest and reasonable $44 million. The film has a good balance between perceptive characterization, solid storytelling, and excellent action. Come for the sensitive and progressive portrayal of autism, stay for Ben Affleck smoking some fools. Or vice-versa.

*Any parents with kids on the spectrum wanna chime in here? This doesn’t strike me as a terribly effective treatment method.

**Exhibit A being the entirely unnecessary Jason Bourne.

Tim Brennan
Tim has been alarmingly enthusiastic about movies ever since childhood. He grew up in Boulder and, foolishly, left Colorado to study Communications in Washington State. Making matters worse, he moved to Connecticut after meeting his too-good-for-him wife. Drawn by the Rockies and a mild climate, he triumphantly returned and settled down back in Boulder County. He's written numerous screenplays, loves hiking, and embarrassed himself in front of Samuel L. Jackson. True story.
See More Articles From Tim Brennan
Tagged: anna kendrickben affleckbill dubuquecynthia addai-robinsongavin o'connorj.k. simmonsjeffrey tamborjohn lithgowjon bernthalthe accountant