Home › Blog › Outdoor › Close Encounters of the Wildlife Kind: How to Escape a Bear Attack

Close Encounters of the Wildlife Kind: How to Escape a Bear Attack

Hypothetically, imagine yourself walking in the mountains, enjoying a nice afternoon hike. You decide to stop at a picnic area. Then, as you sit down, you look directly ahead. There’s a really hairy man sitting on the table across from you. This man must have gone years without a haircut. In fact, you realize that that’s no man at all. You notice that it’s actually a black bear. What do you do in such a situation? 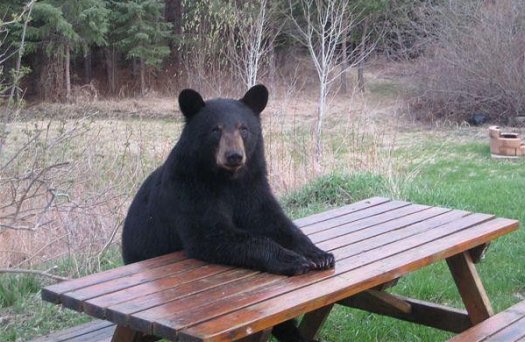 Normally, you would want to just avoid the bear completely. It’s safest to keep at least 300 feet between you and the bear. Unfortunately,  the bear in this imaginary situation at the other picnic table is a mere fifty feet from you, so that option is completely off the table.

It’s very important to let the bear know you’re there. You don’t want to surprise a bear, because bears hate surprises. It’s a good idea to carry bells or talk loudly during your outdoor excursion, just to let the wildlife know that you’re around. If a bear is close by, try talking to it in a low, calm voice. As you talk in a low voice, start to back away slowly and calmly. Also be sure to avoid direct eye contact at all costs, because eye contact can be interpreted as a challenge to the bear. Instead, you want to inform the bear that you’re a human and that you mean no harm. Unfortunately, in this particular imaginary situation, the bear gets up from the table and starts walking towards you.

At this point, you have probably hypothetically soiled yourself, but it’s still critical to stand your ground and not look frightened. Try to look as tall as you can, using whatever you have to add to your height. If you have a backpack, for example, hold it above your head. If you don’t have anything, try waving your arms to make yourself seem larger. During the entire process of this, it is also important to talk loudly in a calm but deep voice. Bears are often bluffing, so if you stand your ground, they are likely to go away. In this hypothetical situation, the black bear walks off and goes elsewhere.

Then, you notice another absurdly hairy man eating berries off a bush. You quickly realize that you’ve once again mistaken a bear for a person, reminding yourself that you need probably need to go to the eye doctor. This, hypothetically, is just not your day. 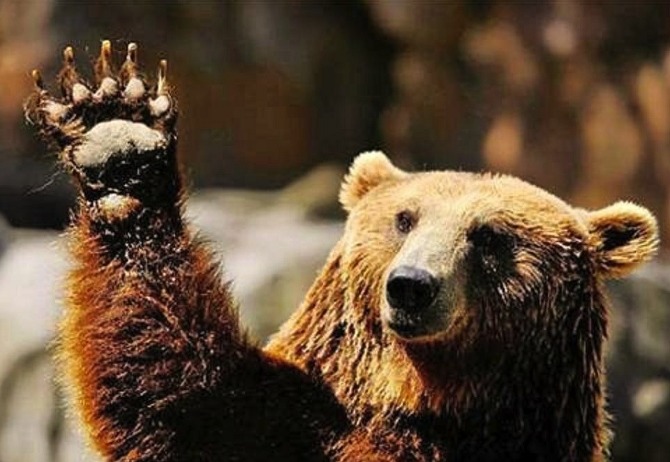 Step 4: Try to Interpret what the bear wants.

There are four basic reasons a bear would want to attack you:

1. You’re between the bear and its cubs.

3. You have food that the bear wants.

4. You are the food that the bear wants.

If you can determine which of these is the cause of the bear’s advances, you might be able to fix the situation. If the bear wants food that you have, then give the bear your food and slowly back out of the area. If you’re between the bear and its cubs or you’ve interrupted the bear mid-meal, the bear will likely act in self-defense. Once the bear makes contact with you (And only once the bear makes contact with you), it is best to lie face-down on the ground and play dead. Be sure to protect your neck by lacing your hands around your neck and using your arms as a neck barrier. This will hopefully put the bear at ease and it will go away. Bear in mind that this method is not foolproof, however. It is possible that the bear may continue to attack you on the ground, but it’s best to lie there and hope for the best rather than having to rely on step 5.

Hypothetically speaking, however, the grizzly bear is starving and wants to eat you. In this case, move onto the next step.

First of all, it is very rare for a black bear or a brown bear to make a predatory attack on someone. Predatory attacks generally come from bears that are immature, wounded, or starving. In the hypothetical situation, the grizzly bear hasn’t gone grocery shopping in weeks and is ready to turn you into human haggis. If you have pepper spray, then spray that at the bear. It will run in the other direction. You probably don’t have pepper spray, however, so that means you’re in the worst-case scenario. In this worst-case scenario, you’ll want to start throwing things at the bear. I’d recommend something like rocks or baseballs, but because baseballs aren’t commonly found lying around the wilderness, rocks are probably your best bet. The bear will likely get scared and run away when you throw things at it, but the hypothetical situation that has been described in this post is quite the opposite.

Imagine the bear gets more enraged and starts charging you. Bears are fast creatures, and unless you’re a pro runner planning on winning this year’s Bolder Boulder, you’re probably not going to win a race with a bear. In this case, your best bet is to try to sidestep the bear when it gets close to you. Because bears have a larger center of gravity and won’t be able to turn as fast as an able-bodied human, you might be able to avoid bears by making quick right and left turns when it gets within ten feet of you. At this point, keep sidestepping the bear until it loses you. We’re going to pretend that, hypothetically, you escape this situation and live to see that eye doctor.

If you really want my advice, though, you should probably start carrying pepper-spray-loaded squirt guns and hike wearing a full suit of armor.