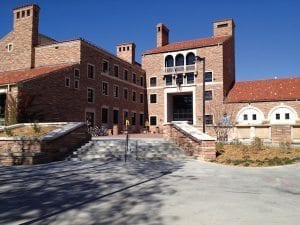 This past Wednesday, a couple of unfortunate events took place. The first was waking up to an Amber Alert text message saying there was a man with a machete on campus and to act accordingly. I was still in bed so it didn’t really spark a reaction in me. Later, news came that the police had him under control. Again, no reaction from me because I had just assumed the situation would be taken care of. When you aren’t close to the situation at hand, you don’t really question your safety. It turns out that the police had shot and killed the man because he wouldn’t back down when they gave him an out. It was later revealed that he had gone into CU’s Champion center, causing the people inside to lock themselves in a room for their own safety. They were in that room for hours before it was declared clear. That alone should have been enough reason to cancel class and shut the campus down, but CU carried on with the day.

I went to the only class I have at 12:45. I walk the same route to that class every Monday, Wednesday, and Friday. It wasn’t until I was in my class that I looked at my phone and saw a chain of messages from my roommates saying that the UMC and the Leed’s building were on lock down and students were evacuating. My one roommate was in a class where her professor made them get under the desks, and then eventually evacuate class. My professor wasn’t as aware of what was going on because he wouldn’t let us leave. Everyone in my class was looking for updates on their phones, any news that would make sense of what was going on. There were a lot of different postings about what was happening—possible shooters in the UMC or maybe a bomb threat. Mix this information with hearing about creepy clowns being spotted on Pearl Street, I really didn’t know what to think. I’ve always felt safe on CU’s campus, but ever since I was a freshman, I’ve had a fear that we would have a school shooting, just because the campus is so big and school shootings are so common nowadays. Aside from the life that was taken in the morning, nothing else dangerous occurred. The possibility that there was a shooter on campus was very upsetting, but thankfully it was just a false alarm.

Lily Lemire
Lily is a senior at the University of Colorado at Boulder and will be graduating with a Bachelor of Arts in Film Studies along with a certificate in Business. She is originally from Scarborough, Maine, but decided to venture to Colorado for it's beauty and to get back in touch with her birth place which is Boulder. She is a Film Studies major because she is very interested in the behind the scenes of what goes into making a film. Not only that, but her favourite hobby in the world is to watch movies. She recently went abroad to Sydney, Australia to get a taste of a different culture. While being there, she learned to not take life too seriously, and to slow things down. The Australian lifestyle can really teach a person how to be chill. You can find Lily at the movies, hanging on Pearl Street having a beer with friends, or at the breathtaking lookout of Flagstaff enjoying the view.
See More Articles From Lily Lemire
Tagged: CommotionCUpoliceScaredstudentsUMCwednesdayWhatisgoingon?
Boulder Colorado Air Quality