Faces of Boulder – Pic of the day! 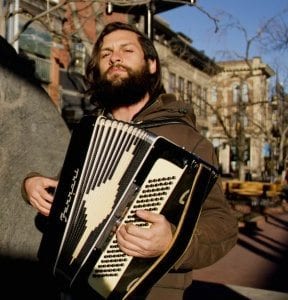 Enjoying Boulders balmy winter? So am I and so is Nicholas, who was playing his accordion on the Pearl Street Mall when I walked by. Not seeing too many accordion players around lately, I stopped and asked him a few questions.

Nicholas is from Gainesville, Florida and this is his second trip to Boulder. He was here for four months last winter and liked Boulder so much, he came back this winter for a yoga workshop. When asked what his attraction to the area was, he replied almost reverently, “the Flatirons, the mountains, the elevation. It’s so different from the flatness of Florida”.

Nicholas is a multi instrumentalist, playing guitar, bass and keyboards. He is a touring musician, but really enjoys busking and meeting people. When I asked him about the accordion, he told me on the eve of his 21st birthday, he had a dream about playing tango music on the accordion. Since he seems to be one to make his dreams come true, it wasn’t long before he was playing. In addition to the yoga workshop, Nicholas has been playing open mikes in Boulder and Denver. He was supposed to leave earlier in the week,  but the curse of Chief Niwot has taken hold and he’s still in town. Look for Nicholas and say hi!