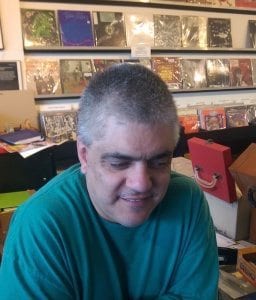 I walked into Absolute Vinyl in East Boulder to scope out what was new. Basil was working behind the counter and we started talking..

Basil grew up here in Boulder but ended up living in Miami for a bunch of years working at Spec’s Music. He moved back to Boulder in 1989 after coming for vacation. He says “I’m not sure why I stayed, but here I am”

I liked Basil. An iconoclast to the core, he wonders what Boulder would be like without the University. He thinks the town would be more interesting.

When he moved back from Miami, he wanted to get back in the music business, but found it very hard to break in. So he ended up working at Coors. One day he wandered into the record store to sell a turntable. The owner asked if he could bring in more and two weeks later he brought in a stash of turntables and amps. He was hired as the gear guy after that. He says he misses the money at Coors, but loves working the record store. “The customers are great and it’s so relaxed.”

When he isn’t behind the counter, Basil is out searching for stereo gear that can be refurbished and given new life.

We talked about the live music scene in Boulder and he bemoaned the loss of the small clubs. He’s hoping that the Boulder scene can revitalize and we’ll start getting new and alternative bands coming through. There just needs to be a venue that works.

He wanted to remind you that Saturday is national record store day and to come in for music and deals!