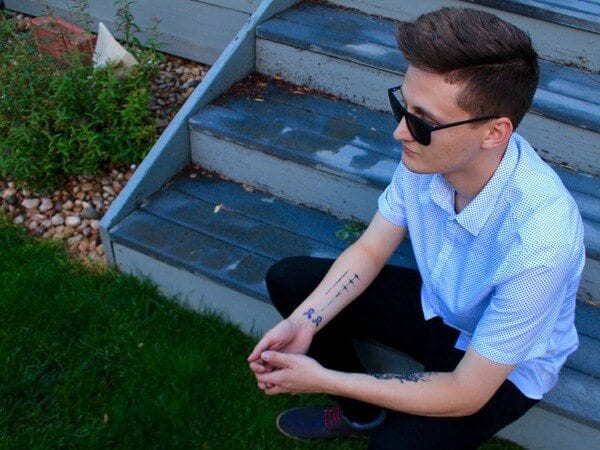 Chance works at his family’s wedding dress shop and spends his time learning about the business. The Wedding Seamstress has been a part of his family for the past seven years in Old Town Arvada. Chance is very outgoing and passionate about many things in his life, and his unwavering respect and love for his stepfather is one of those.

“On my arm I have two ribbons on my wrist; one is black and that is for melanoma, and one is purple for domestic violence. Also on my forearm I have two sound waves. The one on top, the smaller sound wave, is of the last conversation that I had with my stepdad and the bottom one is his laugh. My stepdad was diagnosed with stage-three melanoma cancer in 2011. He went through various treatments, and medical trials, however the cancer was just getting worse. He died on September 29th, 2014. I had already gotten the black ribbon tattoo while he was alive to show support, but after that I really debated what else I wanted to get. So I decided to use one of my last real conversations with him that I had recorded, and broke it down to use the sound waves for the tattoo.”