Home › Blog › Flashback 2015: Finkel and Garf: A Guide to Boulder’s Own Whimsical Brewery

Flashback 2015: Finkel and Garf: A Guide to Boulder’s Own Whimsical Brewery

I’ll be the first one to say it: and this is tough, coming from a self-proclaimed beer junkie. Sometimes, craft brew lovers, we take ourselves a wee bit too seriously. It’s not a problem, mind you. But have you ever been drinking a beer with a friend, only to be so caught up in predicting the grain bill, the hops used, the clarity of the water used, the astrological sign the beer was brewed under… that you forget why you’re actually there in the first place? At the end of the day, shouldn’t enjoying a beer really be about where you are, and who you are with? We don’t go out on Friday afternoons with the people we dislike at work. Obviously, we surround ourselves with friends for the ritual of grabbing a brew after a hard work week. That’s not to say the beer isn’t 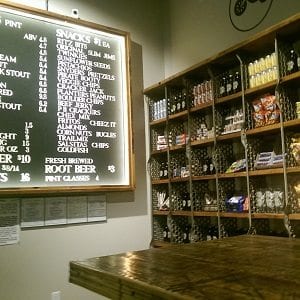 important, but shouldn’t the experience of drinking be just as important?

That’s the argument put out by Finkel & Garf, a new brewery up in Gunbarrel (still technically Boulder), Colorado. The brewery, founded last July by father-son duo Eric and Dan Garfinkel, aims to provide a straightforward, back-to-basics beer experience. In their mind, it’s the experience associated with drinking their beer that is the most important. That’s why, it would seem, none of their beers have names; they are just called what they are. There are no tasting notes anywhere present in the taproom; in their place, a jar of bubblegum, or a stack of Legos. See, when you visit Finkel & Garf, you get it. This isn’t your average taproom. The walls are stocked fully with toys, games, and snacks in every variety – chips, jerkey, peanuts, heck, if you want a can of Spam, they’ve got that too. On the far end of the room, a Rube-Goldberg machine sits idly, waiting for curious hands to turn its cranks. During my visit, this time joined by Boulder real estate mogul and longtime friend, Caleb Block, the bartender picked some 90s hip-hop Spotify station to pour beers to.

The entire philosophy has given me quite a bit of pause since my visit there a few days ago. While Finkel & Garf, just like anyone, strives for high quality brews, they’d be the first to tell you that the beer comes secondary to the people you’re with, and the memories you’re making. In fact, from their website, one of the brewery’s mission statements is, “Beer shouldn’t be the center of attention, but rather a facilitator of unforgettable moments.” Now, I imagine most breweries would sacrifice the experience of drinking one of their beers for the sake of crafting a monumental concoction. It might seem, then, that me spending time analyzing these beers goes against what the fine folks at Finkel & Garf intended. Hey, at least I didn’t come to drink alone, right? Let’s get to it.

When people talk about Finkel & Garf in town, this is typically the beer that comes up in 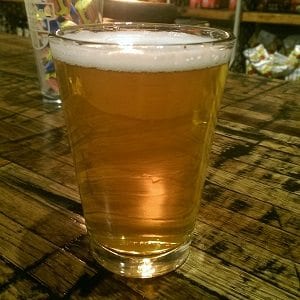 conversation, and it is indeed the brewery’s best seller. Right off the bat, this beer has a striking clarity; a light golden color, with a small amount of thin and diminishing white foam. On the nose, this one is all bitterness, with maybe a touch of grapefruit and other citrus. Intitially, this beer had quite a strong earthy and bready flavor, with a nice and moderate hops kick that you’d expect and hope for from an IPA. The beer is surprisingly thin and short-lived, however. It certainly didn’t taste or seem like a beer with as high an alcohol content as this one boasts. Interestingly enough, it’s actually one of F&G’s stronger ales. The beer lovers at Beer Snobs say that for a beer at 6.5%, it was incredibly drinkable, incredibly smooth, and incredibly sessionable. Perhaps that goes back into the brewery’s philosophy: session beers are meant to be drank during drinking sessions, meaning, you probably don’t want a beer that is too strong in any regard. It’s certainly not the most impressive IPA I’ve ever had, but it might be a very good one to introduce a beer newbie to the hoppier styles. Its sweet and bready flavor, with not that much of a hops kick, makes for a beer that is very accessible to all beer drinkers.

Ah yes, bière de saison. This is a farmhouse-style that originates in southern Belgium, where 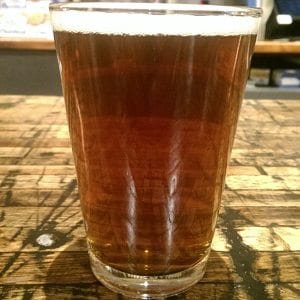 everyone is speaking French. They are characterized largely by their Belgian yeast, and malty and powerful brews. That being said, Saisons are diverse, and can have flavors and colors all over the board. This one came to me with an off-white and thin head, crowned on top of a dark copper, amber body. On the nose, it’s surprisingly sweet, and has that characteristic banana candy smell typical of the beers from Wallonia. The flavor is very interesting. It’s much stronger than the IPA that I had before it, which was a welcome change of pace. It’s spicy, it’s bitter, and it’s sweet, all in one. The beer has a nice, malty flavor, that compliments the peppery, caramely undertones in the flavor quite nicely. Overall, despite the bananas on the nose and tongue, this beer does not really strike me as a typical saison. Perhaps it’s the inclusion of the rye into the mash, but it doesn’t taste like many that I’ve had in the style This is not a bad thing, necessarily. For those beer drinkers searching for authentic Belgians, this might not be your pick. Then again, is there a typical saison? The style is so wide open, who even knows (cue hundreds of Boulder beer snobs telling me EXACTLY how saisons should taste… irony!). 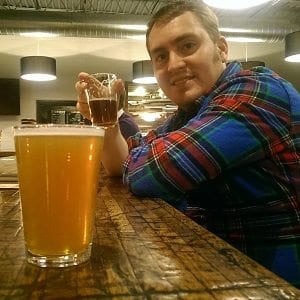 For my last beer of the night, the tap tender strongly recommended the Cream ale. “Don’t worry if you don’t normally go for cream ales. This one isn’t to style.” Huh? Indeed, with the inclusion of orange peel, and the striking exclusion of lactose, this is not a cream ale, to the style. “We just named it that, because it tastes like a Boddingtons.” Fair enough. The beer has a rich gold color enveloped by an off-white, sturdy head. On the nose, the beer was grainy and lightly citrusy. You really do get a little hop bite from this one, which plays along with the citrus inclusion of the orange very nicely. At the end of my sip, there was a striking tartness, which melded very quickly into the piney bitterness of the El Dorado hops thrown into this one. It’s very light-bodied, and finishes without very many lingering flavors. Of all the beers offered to me tonight, I could definitely see this one as the most sessionable. It’s certainly not Boddingtons, but it is pretty tasty.

I imagine, many beer aficionados around town might scoff at a brewery offering their experience first (I imagine this scoffing and brow-furrowing happening during some sort of conversation about what glass is best for what kind of beer). Let’s face it. When the craft beer craze really kicked off some twenty years ago, craft brewers were first trying to find an alternative to the lighter style lagers and dominated the American palate for the last century. Secondly, they were attempting to find a more accessible and friendlier alternative to the wine drinkers across the country. A common sentiment of the time was that wine drinkers were too caught up in their glasses to really, truly enjoy the moment. Have we gone this way too, craft beer community? Finkel and Garf seems to think so, but that’s nothing a few simple and delicious beers, augmented by a few snacks from the snack wall and a stack of building blocks won’t fix.