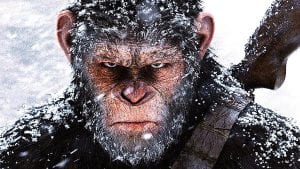 I need to make a couple of confessions to y’all.

First, I am scared to death of chimpanzees. Absolutely terrified. You might respond to that admission with, “What’s the problem with chimps, Mr. Scaredy-cat-wussy-pants? They are adorable, and they have a genetic profile that’s 98% similar to humans.” Fine, I’ll give you that. I’ll also mention that they have five times the arm strength of humans, possess canine teeth that are absolutely alarming and have a fun habit of ripping people’s faces off.

Second, until now, I had never seen any of the proper Planet of the Apes franchise theatrically.* It’s not hard to understand why, considering the first film was released in 1968, and the remaining four sequels were released between 1970-1973. I did catch a few of the films on TV. Not my cup of banana-flavored tea, but I understood where the love for the series came from, particularly the original. Despite ever-decreasing budgets, they attempted science-fiction that was smart and thoughtful.

Time passed, and various attempts were made to revive the franchise. In 2011, it was rebooted with Rise of the Planet of the Apes. The film did well and earned good reviews. I turned up my nose and skipped it because, sometimes, I’m pretty stupid. 2014 rolled around with the second installment, Dawn of the Planet of the Apes. As before, the sequel made money, was well received critically, and your humble and dumb critic skipped it. Through the magic of Netflix, I finally decided to give the reboots a shot.

You guys. You guys. I loved them! Why didn’t anyone, other than literally everyone, tell me how great these films are? I felt like a nitwit, a dingaling, a clown, an absolute chump for not initially making them a priority.** When a third film was announced, War for the Planet of the Apes, I swore that I would see it theatrically. I felt good about the capper of the new trilogy, and I had faith in these damn dirty apes. My faith was more than rewarded.

To bring you up to speed, well-meaning researchers attempted a cure for Alzheimer’s Disease. As so often happens, the cure mutated into the Simian Flu, a virus that simultaneously wiped out most humans and boosted the intelligence levels of primates. Caesar (Andy Serkis***), a chimp raised in captivity, has led a revolution and took on the mantle of leadership. All he wants is for his apes to live in peace, but frightened humans continually provoke them.

Fifteen years have passed since the outbreak. Caesar has become an urban…sorry…woodland legend, and the stray groups of soldiers hunting him speak of him in hushed tones. He doesn’t have any grand plans beyond survival, yet years of constant conflict have hardened him. Conflict returns to Caesar when a military faction led by The Colonel (Woody Harrelson) attacks the ape camp and slaughters several apes, including members of Caesar’s family. He’s learned much from humans, including the fact that tragedy can spawn vengeance.

The apes may have found a place where they will be free of human persecution. That’s dandy, but a reckoning is required first. While the apes begin their journey, Caesar searches for the Colonel’s headquarters. He’s joined by the compassionate orangutan Maurice (Karin Konoval) and the chimp Rocket (Terry Notary). During their journey, they encounter a mute human girl (Amiah Miller) given the nickname Nova, as well as Bad Ape (Steve Zahn), a lone chimp who provides some of the few moments of comic relief.

Like horror movies, science fiction is at its most effective when it acts as an allegory. The original Apes films were allegories about racism, animal rights, and other topics relevant to the time in which they were made. This trilogy is no different, only the main focus is on the persecution of The Other. Caesar and his apes could be stand-ins for Muslims, LGBT, virtually any group of people persecuted by ignorant white people. It’s perfectly timed for our current climate, and there’s even a plot point about the pointless construction of a wall. The screenplay by Mark Bomback and Matt Reeves is well done, and while it doesn’t quite have the sophisticated group dynamics of the previous film Dawn, it makes an effort to give everyone, including The Colonel, a point of view. Speaking of points of view, the script makes the wise decision to mostly stick with the apes instead of cross-cutting between them and the soldiers. This makes it easier for the audience to sympathize with Caesar, and when the audience only knows what he knows, both the stakes and the suspense goes up.

Matt Reeves directed, along with Dawn, and I am becoming a big fan of his work.  He’s made a film that’s clean, crisp, and beautifully shot. Too many blockbusters are jammed to the rafters with CGI creations and a plethora of pixels. While War has its share of performance capture and effects, Reeves works with cinematographer Michael Seresin to create a rich and natural look. I can’t help but think of the apes traveling through beautiful and desolate snowy vistas or relaxing near gigantic waterfalls. The film has minimal dialogue, which makes the score by Michael Giacchino that much more important. It conveys emotion and conflict so effectively that it’s one of the best scores I’ve heard in years.

The cast is impressive, and they likely won’t get the credit they deserve. Sure, you’d expect Woody Harrelson to play a hard-assed military man well, and he doesn’t disappoint. The real stars are the ape actors, particularly Andy Serkis. Behind the CGI, you can see kind of an impression of his features. With that and body language as his tools, Serkis creates a layered and nuanced performance, using very little dialogue. Caesar is determined, haunted, enraged, and very occasionally amused. This is the stuff of Best Actor nominations, and I would bet you cash money that instead of a rightfully deserved Serkis nomination, we’ll be rightfully enraged on his behalf when he gets snubbed.

This summer is about halfway over, and I’d imagine many of you are suffering from Summer Movie Fatigue, or SMF. I get that, and I understand that if you’re unfamiliar with this franchise, the idea of talking apes may be more than you can stomach. SMF is insidious because it can prevent us from seeing greatness. War for the Planet of the Apes is a great film, and it’s the end of one of the best science fiction trilogies made in years.

**That’s one of the great things about movies, though. They’re always ready for you to see them.

Tim Brennan
Tim has been alarmingly enthusiastic about movies ever since childhood. He grew up in Boulder and, foolishly, left Colorado to study Communications in Washington State. Making matters worse, he moved to Connecticut after meeting his too-good-for-him wife. Drawn by the Rockies and a mild climate, he triumphantly returned and settled down back in Boulder County. He's written numerous screenplays, loves hiking, and embarrassed himself in front of Samuel L. Jackson. True story.
See More Articles From Tim Brennan
Tagged: amiah millerandy serkiskarin konovalmark bombackmatt reevessteve zahnterry notarywar for the planet of the apeswoody harrelson
Boulder Colorado Air Quality