John Wick Blasts His Way Into Our Hearts 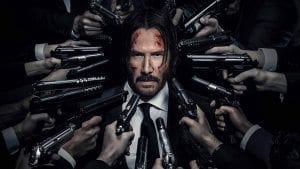 There are many reasons why I want a time machine. I’d like to see a live t-rex – from a safe distance, of course. I’d like to see The Beatles live, or stroll through the streets of Renaissance-era Venice. You do it like that, you don’t have to worry about screwing up the space-time continuum. But I know myself, and I know I’d eventually become highly irresponsible.

I’d travel back to 1988, specifically to San Dimas, California. There, within San Dimas High School, I’d see the filming of Bill & Ted’s Excellent Adventure. During a break, I’d take one of the primary cast members aside for a little chat. He’s a nice enough kid. A little blank looking, but smarter than he seems. He has this goofy-ass name that means “cool breeze over the mountains.” I’d tell him that, over time, he’ll make a boatload of movies. Some of them will be terrible. I’d let him know that he’ll irreparably maul an English accent, commit grievous bodily harm against a New York accent, and do unspeakable things to the words of William Shakespeare.

But before the lad’s eyes can well up with tears. I’d also let him know that he makes some all-timers. There’s one about a bus that won’t slow down that should be dumb as hell, but isn’t. There’s another that’s a gleeful mash-up of superhero mythology, cyberpunk tropes, and a dash of philosophy for flavor. Over time, whether or not people realize it, he becomes a legitimately fine actor. Perhaps best of all, he’s the lead in one of the greatest action movies in the history of film. His mind is blown. He knows he’s destined for greatness, yet struggles to remain grounded. He responds to this in the only way a rational human being truly can, with the only phrase that makes sense.

In 2014, Keanu Reeves was in a bit of a slump. He hadn’t had a hit in years, and the studios weren’t considering him for much. He needed a comeback. He got one, big time, with John Wick. It only a $20 million budget, and it was made by a couple of first-time filmmakers. But these directors had extensive experience as stunt performers, and they had a smart script and a lead actor who was game for anything. It was a success, naturally. The studio asked for a sequel. You’d expect a second installment to be dumber and lazier, right? I would, and I’d be wrong, since John Wick: Chapter 2 is absolutely incredible.

We pick up shortly after the end of the first film. John Wick (Keanu Reeves) is an assassin…no, he’s the assassin. In the previous film, he sought bloody retribution after the theft of his car and the death of his adorable puppy. Now he’s gotten a new puppy, but he wants his car back. In an explosive opening sequence, he gets it back, kills the hell out of a bunch of people, and threatens a Russian gangster played by the magnificent Peter Stormare.

Now he’s retired, for realsies this time. Not so much, because Santino (Riccardo Scamarcio) comes knocking on his door. Back in the day, Santino helped Wick retire, and Wick owes him a blood debt. It’s represented by an ornate gold medallion which opens to reveal a slip of paper with bloody thumbprints upon it. Santino has dreams of ascending to The High Table, the mysterious elites who control worldwide criminal activity. How’s he going to do it? His sister sits on The High Table, and Santino’s brilliant plan is to press Wick back into service. If Wick ices his sister, Santino can take her place.

Wick politely declines. Santino politely blows up Wick’s house.* Wick reluctantly reconsiders and jets off to Rome. From there, Wick tangles with Cassian (Common), a killer just as principled and deadly as Wick. He locks horns with Santino’s deaf enforcer Ares (Ruby Rose) and enters into an uneasy alliance with The Bowery King (Laurence Fishburne). Returning from the first film is the elegant Winston (Ian McShane), the manager of the Continental Hotel, and his efficient concierge Charon (Lance Reddick).

Before we go any further, let me make one thing clear. John Wick: Chapter 2 is ferociously violent. People are slaughtered in a wide variety of ways. There are a plethora of headshots, and we’re not talking actors’ photos here. Is the film gun porn? Without a doubt, as evidenced by an amusing scene between Wick and a weapons sommelier played by Peter Serafinowicz. Is that a problem? I don’t think so, since violence definitely can be a means of artistic expression. We see that not just in the practice of martial arts, but also what it tells us about the emotions and characterization behind this film’s combatants. Common’s Cassian is direct and forceful, whereas Wick is disciplined and elegant. Having said all that, your mileage may vary. Just consider yourself warned.

Director Chad Stahelski has set a ridiculously high bar in action cinema. He’s a former stunt performer and coordinator,** and he co-directed John Wick with David Leitch. Leitch is off working on Deadpool 2, so Stahelski helmed this film solo. Many filmmakers these days hide their lack of action chops behind shaky-cam. They’ll film a car chase or fisticuffs, and over-edit the sequences to make it feel like you are there! Stahelski doesn’t need that nonsense. His action scenes are usually cleanly shot so that we can see the entire bodies of the actors for long takes. We’re able to appreciate their physicality and intricate choreography. Stahelski also never lets the action become one-note. He’s not afraid to get quiet, with an extremely subtle gunfight that’s reminiscent of old samurai movies. Along with his cinematographer Dan Laustsen, they take advantage of a rich color palette and create a genuinely beautiful looking film.

Screenwriter Derek Kolstad returns from the first installment as well, which is another of this film’s many blessings. These days, too many movies and television series confuse world building with over-explaining. Kolstad understands this and peppers his world with just the right amount of detail. We learn more, and we’re shown that Wick and his underworld ilk have their own rules that they abide by. More importantly, he shows us why these rules matter to the characters, and what the costs are of breaking them. Additionally, he’s able to imply the characters’ rich histories with a minimum of fuss. Believe it or not, this film is just as potent an examination of masculine grief as Manchester by the Sea. Kolstad is an elegantly efficient screenwriter, and fellow writers would do well to follow his example.

We also have a cast that understands exactly what kind of film they are appearing in and calibrates their performances accordingly. Scenery chewing is fine in action movies if done in service to the story. We get that with Ian McShane’s lordly Winston and the oily intensity of Riccardo Scamarcio as Santino. Even glorified cameos like the booming laugh from Laurence Fishburne’s Bowery King or the brief return of John Leguizamo’s chop shop owner Aurelio make solid impressions.

But it would all fall apart without the magnetic and subtle performance from Keanu Reeves. As he’s gotten older, Reeves has gained a kind of weary gravitas. He’s also one of the best physical performers working in movies today. I don’t just mean his obvious commitment to realism in fight scenes and firearms training. He understands how to communicate a feeling with a glance, slumped shoulders, or a half-smile. His character doesn’t have much dialogue. That’s a plus because he doesn’t need it.

Action movies are like comedies. Both are genres that are extremely difficult to do well, and both are underappreciated for their skill. John Wick: Chapter 2 isn’t just a great action movie. It’s one of the best action movies ever made, and it stands alongside other classics like The Raid, Mad Max: Fury Road and Hard Boiled. The end of the film teases a third installment in the adventures of Reeves’ isolated killer. You know what? Bring it on.

**Can we all agree that it’s a travesty that stunt professionals aren’t recognized at awards shows like the Oscars? What they do requires a high degree of skill and creativity, yet they often don’t get the acclaim they truly deserve.