I am excited to announce that one of our original columnist has officially launched his book. In fact, it happened on February 22nd and I could not be more excited.

Matt Harris was one of the original bloggers for About Boulder, where he focused his energy on a motivational blog series entitled, “Matt’s Motivational Mondays”. The column was a big hit and generated a lot of traffic, adding a lot of value along the way. Matt and I have had so many incredible conversations since connecting a couple of years ago and I am thrilled for him to join the club of official authors.

Matt and I quickly developed a friendship upon our first conversation. We have had so many great chats and lunches over the years and we continue to inspire each other to think bigger and make a bigger impact in the world. 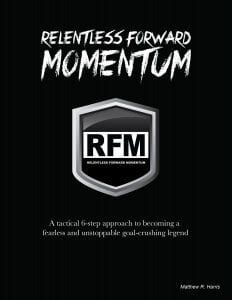 Matt’s book is called Relentless Forward Momentum: a tactical 6-step approach to becoming a fearless and unstoppable goal-crushing legend. In the first few months, Matt’s book has had tremendous success and it has been a huge launch platform for his performance coaching business which has always been a passion of his. He is a person who believes that the “sky is the limit”, but also knows how to get to work.

It’s been a lot of fun for me to witness the results that are occurring as I was very connected throughout the whole process. Matt and I chatted about the book frequently and it’s amazing to see the materialization of a simple idea. It just goes to show how with a little bit of discipline, some accountable and an intense focus, anyone can become an author.

Matt’s book and action guide have become a huge resource for me and so many others. It’s just exciting for me to watch as it all unfolds. Everyone should take a minute to check his book out. It’s a very worthwhile investment in your future.