It’s rare to say that a movie is better than a book. And usually, if you do, the literati will leave a nasty note on your door.

But Wild the book–the memoir by Cheryl Strayed–was a story filled with more sulking than hiking. I gave up halfway through. I didn’t find the protagonist likable or compelling in any way. 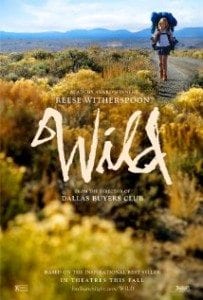 The movie Wild, however, did a lot of things right. Reese Witherspoon is perfect as the woman broken by the death of her mother who goes out to hike the PCT in search of herself. Witherspoon makes the role seem natural and adds the right emotional content at all the right times.

The film uses lots of micro-flashbacks to tell the backstory as she hikes, rather than spending the first half hour setting up why she’s going. Mom dies, Cheryl falls into some bad coping habits, and loses most everyone she cares about in the process.

Witherspoon gets about 80% of the screen time here, with Laura Dern as mom taking a small part, but it’s mostly a lot of slogging along the trail and Witherspoon reflecting on how she got where she is, and the occasional conversation with other people on the trail. Maybe that sounds boring, but it all works.

I expect Witherspoon to get a second Oscar nod for her work here. The movie is worth seeing, at least for her.

The only negative I can add is that the ending is a bit anti-climactic. You can more or less predict how it will end.

After Birdman, this is the second-best movie I’ve seen this year.

As a side note, I also saw The Interview and thought about reviewing it, but I’ll just say this: wait to Netflix it, then turn it off after the first 30 minutes. It stops being funny as soon as they land in North Korea. Save yourself an hour of your life.