Just as J.R.R.R. Tolkien intended, the third film based on his 250-page children’s book just came out in theaters, drawing the prequel to the Lord of the Rings to a close.

Recently, I railed against Hunger Games for this same tactic of stretching a single book across multiple movies. In that movie, it didn’t work. But Peter Jackson makes it work, because he uses a wide range of other obscure Tolkien material to flesh out the story. 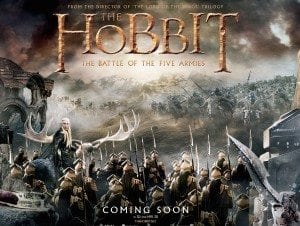 All your favorite characters are here: the dope-smoking wizard Gandalf, autistic Legolas the elf, the perfectly-cast Martin Freeman as Bilbo, a bunch of normal people squatting to play dwarves, Kate from LOST, and Benedict Cumberdragon.

WHAT WORKED: As always, Peter Jackson does big action sequences and special effects with incredible skill. I didn’t mind that it was in 3D, which usually annoys me. He even tugged at my heart strings when a couple of key characters died, which I wasn’t expecting. It’s not exactly a character drama, but each person gets enough screen time that you end up caring about them.

WHAT DIDN’T WORK: the Hobbit movies have been pretty good. The second one was the best. But there’s something about these movies that lacks the magic of the original Lord of the Rings trilogy. I can’t quite put my finger on it, but those movies felt special. Return of the King had such an epic scale that not even the explosion-y-est Michael Bay extravaganza could compare. Perhaps true fans of the books will have nerdgasms with all the (presumably) authentic elvish subtitled during the dialogue, but I got a bit lost with all the names of places and who begat who and such.

Should you see it? If you liked the other five movies in this series, then definitely yes. But it’s not a movie for the middle earth uninitiated, for sure.