Benedict Cumberbatch finally gets his chance to star in a prestige biopic, in a totally new movie based on the life and times of Alan Turing, the British mathematician who helped end the war and invent the machines that became computers. 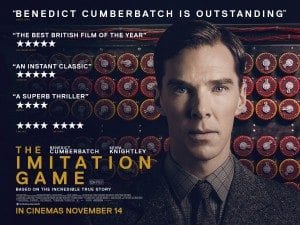 The Imitation game tells three stories, and like any good biopic, one of those stories is about Turing as a child, wherein we learn something about what makes our hero so troubled/brilliant.

The other two stories follow Turing during and after the war, about his mission to break the unbreakable German enigma code, and also his subsequent persecution as a homosexual.

The movie succeeds on the subtlety of the storytelling and Cumberbatch’s powerful performance. It would have been quite easy to use the theme as a heavy hammer, but the script, the directing, and the acting all work well to tell a seamless story.

Kiera Knightly is, essentially, the only female in this entire film (failing the Bechdel test spectacularly), so she shoulders that responsibility well, playing more than just the supporting wife. She’s her own character with her own personal arc. Even so, her character is still in support of Turing, to counterbalance his secret life.

The film mostly rests on one scene in which a detective interrogates Turing, and Turing discusses why some people have different tastes than others, and why machines and humans can or cannot be distinguished.

While not my favorite movie of 2014, (see: Birdman, or Wild) it’s worth it to see Cumberbatch chew the scenery with such skill.