Given that marvel movies are about guys in costumes fighting crime, it’s incredible how realistic and believable the stories are. But not only that, you have to add in Marvel’s ability to cross pollinate so many different characters stories.

And they always balance out the action with a good amount of character-building dialogue. We come to love these characters and genuinely care about what they go through. Too many action movies don’t spend enough time making us interested in what happens to the people, and instead get lost in explosions and dudes punching other dudes. 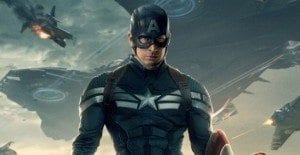 Captain America 2: The Winter Soldier moves past the origin story of the first movie (aren’t the superhero sequels usually better, anyway?) to get into the business of captain america doing americany stuff like protecting the country from enemies foreign and domestic. And the meat of this movie is that exactly who those enemies are is a mystery that Cap has to solve.

It’s about paranoia and trusting people. Samuel Jackson as Nick Fury tells a story about his grandfather, saying, “grandad loved people, but he didn’t trust them very much.” And therin lies Cap’s mission. Discern his friends from his enemies and stop some bad stuff from happeneing.

Robert Redford, cast here to add some acting weight, argues with Cap about the role of a soldier . “soldiers trust each other, that’s what makes it an army, ” cap says. That’s about as thematically deep the movie gets, but it doesn’t feel too superficial.

While it does go overboard with the explosions at times, and the peter berg-y shakycam got on my nerves, the movie held my interest and didn’t feel too simplistic. As a matter of fact, the complex plot was even at time hard to follow because of al the facets. Who is on who’s side, good guys, bad guys, and whatnot. Heavy on the whatnot.

Scarlet Johansen as Black Widow improves upon her smirking skills, Chris Evans improves upon his pectoral-flexing skills, and Samuel jackson shows us he’s the master of the disapproving scowl. Who else can scowl like Sam Jackon? I dare you to find someone better.