When Sandra Bullock won the Oscar for the The Blind Side, everyone just shrugged and said, “meh, it was a thin year”. So the idea that Sandra Bullock is a talented actress has gotten way out of hand. Her performance in this movie wasn’t enough to ruin it, but it could have been better. Not as good as one of your Chastains, Lawrences, Hathaways (see: Interstellar and Mockingjay), etc. But decent enough.

Gravity is a visually stunning movie. For reals. If you’ve got a big fat 4K LCD with 37.1 Surround sound, you’re in for a treat. It will possibly melt your eyeballs, so fair warning. 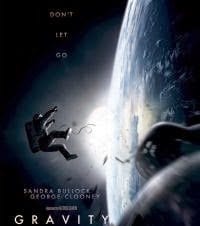 All of the choreography, the suspense of the action sequences, the impressive zero-gravity simulation technology, the lengthy single-shot scenes (the opening scene is a single 17-minute long continuous take… think on that for a second), it’s all stunning.

And intense… this is one of the most intense movies I have ever seen. Huge action set pieces mixed in with genuinely claustrophobic moments of terror.

Still, I couldn’t help but feel like something was missing throughout the movie. I kept trying to figure it out, as I was watching, but I couldn’t solve the puzzle.

There’s the story… it’s light. While there is an abundance of plot, there is little story. We only get tiny glimpses into characters’ backstories– which isn’t in itself a bad thing– and there’s so much going on, we hardly have time to pause to think about who these characters are and what they want. George Clooney is his usual charming and ironic self, Sandra Bullock is a stock Woman With Traumatic Past In Danger character.

Like the show Hell On Wheels… I wanted to like what I saw, but it was always missing something. It was like Deadwood, but devoid of the wit and dark humor that made Deadwood so much dirty fun.

In the end, I’m not sure. Maybe it’s that I never really cared about Sandra Bullock’s character enough to be interested in whether or not she succeeded.

But would I still recommend this movie? Absolutely. Worth a rental. It’s a visual spectacle, just don’t expect too much more than that.