“You’re in my place,” says a man to Simon James (Jesse Eisenberg) on the train. There are plenty of other places to sit, but the nondescript man wants Simon’s seat. Simon, being the meek man he is, gives up the seat.

So opens The Double, based on the novel by Dostoyevsky. It’s a drab, mustard-colored look at identity. The setting is some kind of surrealist 1970s industrial steampunk land, and the entirety of the movie takes place in an office building, an apartment complex, and a diner. Claustrophobia galore. 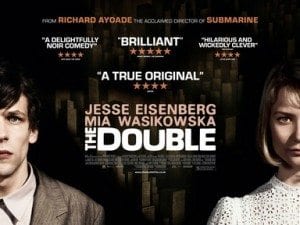 “There are no special people, just people,” says The Colonel in a television ad. The Colonel runs the company where Simon works, collecting data on people and doing vague things like “regression analysis.”

Simon James is in love with Hannah, the girl who works in the copy department, but he can’t tell her. Hannah is sad, and usually drenched in blue light any time we see her. The blue sadness and the copy department are good examples of the occasionally heavy-handed symbolism of the movie. It’s staged like Wes Anderson, but without the mirth. The Double is a dark place to be.

Everything changes for Simon when a man who looks just like him appears at the company. But this other man, James Simon, is everything Simon James is not: he’s confident, ambitious, unafraid to talk to and woo women, particularly Hannah.

You might expect the movie to devolve into predictability at this point as the lives of Simon James and James Simon cross and become complicated. And it does, at first, until we sink further into surrealism. Is all of this happening, or is it inside Simon’s head?

The events leading up to the climax had me guessing, and that’s what makes this such an entertaining movie, if not a convoluted one. The ending will probably leave you scratching your head. Hours later, I still couldn’t figure out exactly what had happened, but I think I understand the movie’s message. Which I won’t spoil for you. Because I would recommend you see it, and I’m not a spoiler kind of guy.