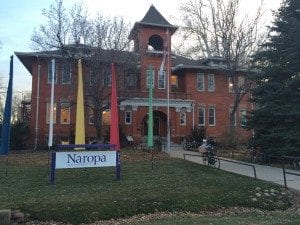 The history of Boulder in inextricably intertwined with the story of American Buddhism, specifically the teachings of Naropa’s founder, Chogyam Trungpa Rinpoche. I sat down with Naropa’s Director of University Relations, Bill Rigler, for a very informative inquiry into how Naropa University’s influence has shaped Boulder.

The story goes that by the summer of 1974, Chogyam Trungpa Rinpoche had amassed a following of students in Boulder and nationwide. That summer, they gathered in a bus depot in downtown Boulder in the location that is now known as Alfalfa’s Market, and explored mindfulness and Buddhist studies. The organizers were initially hoping for a few hundred attendees, and when more than 2000 participants showed up, they realized that perhaps it was an opportune time to establishing a more permanent presence in Boulder. As Naropa began to take shape, authors, poets, and artists like Allen Ginsberg, Anne Waldman, and William S. Burroughs came to Boulder at the urging of Chogyam Trungpa Rinpoche, and together these groups collaborated to create Naropa Institute—which was later renamed Naropa University. This dynamic group of inner explorers created one the most unique educational opportunities to study the humanities. The Summer Writing Program helped put Boulder on the map for those interested in the humanities.

This year is Naropa’s 40th anniversary. It is a foundational Boulder institution, bringing world-reknowned speakers, teachers, artist, musicians – all here to explore all parts of the human experience in one container. Naropa has been an accredited University since 1986, offering undergraduate and graduate degrees in such fields as Contemplative Psychology, Environmental Studies, Peace Studies, and the Arts in various forms. 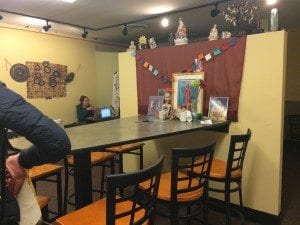 When asking student Charlie Angelo why he choose Naropa for his education, he said he was studying Eco-Psychology, the way nature can help us to come to full realization as a human and subscribing to the belief that we are not separate from nature. He said he was interested in the contemplative side to education. Today, there are around 1000 students at Naropa, and two-thirds of them are graduate students. And these kids are pretty local, with 30% of all Naropa students coming from Colorado, and 70% transfer students from other institutions. It is a private liberal arts college, with a 9:1 ratio of students to faculty. And as many of us may already know, Naropa is not inexpensive with the cost to attend at around $40K/ year, which makes it competitive with the out of state tuition costs for CU. Also, two-thirds of undergrads use financial aid. Federal grants have facilitated Naropa’s ability to attract students who otherwise might not be able to afford higher education.

Of course, we all know CU is next door. I was curious to how the relationship has been between the two universities with very different approaches to education. Bill said that while relations might have been a bit chilly earlier, the renewal of a strong working relationship between Naropa and CU has been a particular priority for current President Chuck Lief. He has been a big mover for bringing union to the two institutions. As an example, earlier this week Naropa and CU co-sponsored Dr. Richie Davidson, a neuroscientist who did a lecture on Science and Mindfulness to a sold-out crowd of 1400 folks. Science is catching up with theory and applications.

Naropa is integrated in the Boulder culture and has serious economic footprint in the community as well. The annual direct and indirect financial impact for Boulder $ 100 million to Boulder / operating budget 25 million, families, staff, faculty most live in Boulder County. Naropa employs approximately 200 people. There are three campus’ Lincoln Meditation Hall at 2130 Arapahoe Avenue, Paramita Campus Meditation Hall at 3285 30th Street, and the Nalanda Campus Meditation Hall at 6287 Arapahoe Avenue anchoring the East Boulder expansion in partnership with the City of Boulder. 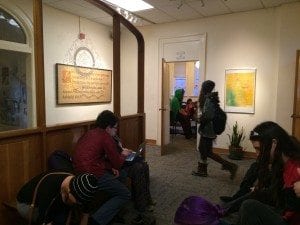 Naropa culture has spread past the Boulder City limits around the world through its 8,000 alumni. As many of you may have read, science is catching up with meditation practices and mindful living with many studies on how the mind and body react to stress and how meditation supports healthier reactions in humans. Corporate leadership has taken notice and is promoting this type of self care. Naropa is on the cutting edge of this work. Focusing on mindful leadership, many Naropa faculty and staff have participated in nationally recognized events as the Mind & Life Institute, the Mindful Leadership Summit, and others, where they have hobnobbed with such luminaries as Sharon Salzberg, Tara Branch, and Congressman Tim Ryan, Eileen Fisher, and the Dalai Lama.

Obviously, this little baby called Naropa that was born 40 years ago here in Boulder has birthed a culture that is spreading worldwide. A mindful culture, an attempt at making this thing called human nature and society work.
If you are interested in listening to some of the hundreds of amazing lectures from many famous voices, check out  Naropa’s archives: https://archive.org/details/naropa

Special thank you to Bill Rigler for taking time to share so much information with me.