On Wednesday November 12th in the Netherlands, Earth’s first road that generates electricity from sunlight was opened in the town of Krommenie according to CNN’s website. Officials from SolaRoad, the company that developed this solar roadway said that while this is currently only a test route the electricity generated can be used to power parts of the transportation system such as traffic lights and stops, but also homes. The Solar Roads can also be programmed for a vast amount of extra utility, and according to SolarRoadways.com there are vast benefits for using solar roadways in contrast to our current road system.  A few of those benefits include: 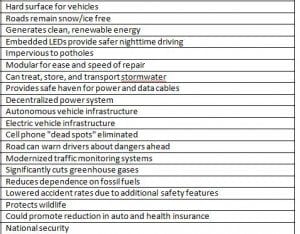 The solar road is in fact not a major highway or interstate but rather is a bicycle path only a little over two hundred feet in length. The solar road is composed of small, modular solar panels that fit together, are individually protected by tempered glass and built into concrete.   The solar road in Krommenie will continue to be used for testing during the next three years, and is expected to build recognition for the Netherlands’ push towards a sustainable future. 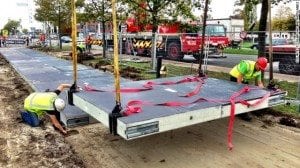 “‘SolaRoad is a world first that will put the Netherlands on the map as a leader in sustainable innovation,’ said Henk Kamp, the Dutch minister of economic affairs, at the opening”. (CNN)

In recent years there has been a populist shift in Boulder County to decentralize the power system. There has also been political activism for people to have a choice to purchase energy from a municipal provider instead of the only provider available to the public, which is a large corporation any homeowner in the Denver-Boulder region is familiar with.  Solar roadways are not only a feasible way to decentralize energy dependence in our area and municipalize its production in a way that also is green and boosts sustainability, but it comes with a ton of really, really cool features. 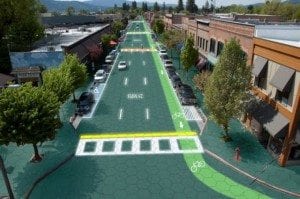 Solar Roadways passes $1.4 million in crowdfunding: Just short of the $56 trillion required, but not bad for a crazy idea