Fracking is done by injecting a mixture of dangerous chemicals, water and sand into shale deposits at high temperatures.  This mixture is then pulled back to the surface after absorbing what can be used for fuel in order to have the oil and natural gas extracted. Due to improper regulation of these facilities, environmental crimes that impede important industries and degrade quality of life are being committed without accountability. “industry has used its political power at every turn to gain exemptions from environmental laws designed to protect our air and water.”  The Natural Resources Defense Council, or NRDC, has released information stating that unregulated fracking threatens the health of U.S. Citizens, environmental health, as well as our water supplies. 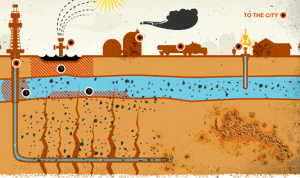 The Dangers of Fracking to Human Health and the Environment Include:

Seismic activity from fracking can disrupt wildlife and cause collapse of bedrock, creating unrecognizable landscapes. Smog created from fracking in rural regions are at concentrations comparable to some of the worst smog in the world, such as Mexico City or Los Angeles. Toxic air pollution near fracking sites can cause health complications, such as cancer and birth defects, as well as damage ecosystems. Furthermore, the high volume of trucks used for transportation of oil produced creates sound pollution and traffic in rural areas. This often can interfere with community life and create obstacles for locals as seen in the documentary FrackNation. “These wells are accompanied by massive new infrastructure to move, process, and deliver oil and gas, together bringing full-scale industrialization to often previously rural landscapes”.

The Dangers to Our Water Supply:

Fracking is incredible demanding on the water supply. In fact, the oil and gasoline industry is in direct competition with farmers for water rights, which has caused water prices in the midwest to skyrocket.  The NRDC stated that “The millions of gallons of water used in fracking operations not only strain water resources, but end up as vast amounts of contaminated wastewater”. 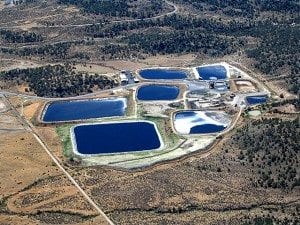 The water used for Fracking is hardly considered salvageable after use, and if this ‘sludge’ leaks into the environment it can contaminate water tables and rivers. A methane leak from drilling can make an entire region’s water table flammable and not safe for drinking. As it stands, the oil and gas industry already leaks a plethora of methane into the atmosphere as seen in the Bakken Fields of North Dakota. 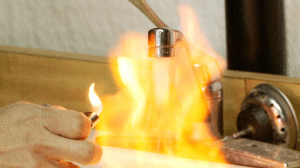 In order for fracking to be executed in a way is compliant with laws and regulations, tedious research is required for every drill site in order to make sure there is no toxic material leaking, no freshwater squandered, and that no seismic activity will be produced. If this were done at every site properly there would be less damage done to human health, our water supply, and the environment. The companies that install the drills however, instead of following regulation, privately contract a large corporation to run these operations. This privately contracted large corporation is inadequately regulated and not held to accountability for environmental or human health issues. While this corporation goes unpenalized for their actions, it is clear that unregulated fracking threatens the health of U.S. Citizens, environmental health, as well as our water supplies.