Sally Elliot is a local painter with an illustrious career spanning over four decades. She was a founding member of the Front Range Women in the Visual Arts in 1987, and helped produce visual arts, music, and theatre productions throughout the state, including a major anniversary exhibition for the Boulder Museum of Contemporary Art in 2000. Elliot is also a long time member of Spark Collective Gallery in Denver, where her work is shown regularly. She’s been the recipient of numerous awards and the subject of many publications. In 1985, she was awarded a year as an associate at the Rocky Mountain Women’s Institute. In 1992, she received a Boulder Arts Commission Grant, and in 2002, she was awarded a three-week residency at the Virginia Center for the Creative Arts. In 2004, she was a recipient of a fellowship from the Colorado Council on the Arts. In 2016, she was one of the honorees for the Dairy Arts Center’s award in Boulder, and was on the steering committee that produced “A History of the Visual Arts in Boulder,” which exhibited over 300 visual arts at 18 venues. She has also been a visiting artist and lecturer at several colleges and universities across the United States. From 1999 to 2011, she was on the Drawing and Painting faculty at the University of Colorado at Boulder and received professor of the year in 2006. Her work is in numerous private and public collections, including the IBM Corporate Art Collection, Kenyon College in Ohio, Front Range Community College and Kaiser Permanente in Denver. She currently lives in the mountains north of Boulder.

You can find out more about Elliot, and see more of her art at www.sallyelliottart.com.

Her work will be featured in an upcoming group show at Spark Gallery, premiering December 19th. 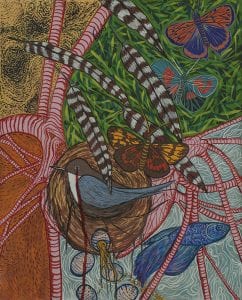 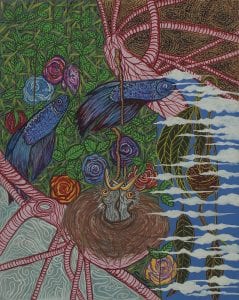 “Murmurations I and II”

“Birds, Butterflies, Beets and Betas float through space suggesting regeneration with a dreamlike quality in both paintings. Pink hearts surround and protect the images with veins going in many directions as the water swirls below.

The heart image is found in many cultures and is an image that represents our soul, our passions, and our pain. For me this also represents an inner journey. The pink hearts in these painting surround and protect the baby birds but the mother has died mysteriously. The tiny murmurations float above in iridescent backgrounds.” 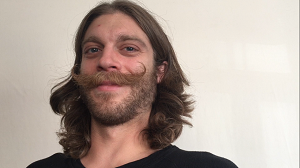 Jared Herzing
Jared is a local content contributor and aspiring author. He was fortunate enough to grow up in Golden, Colorado and graduated from MSU Denver. While an insatiable love of travel lures him all over the world, his roots remain firmly planted here. He enjoys writing short stories, poetry, children's books, societal observations, and everything else. A nature enthusiast and sunshine connoisseur, Jared is perfectly at home on any mountaintop or patio. He frequents art galleries and concerts, poetry readings and breweries, museums and bookstores. When he isn't making neighbors cringe at his musical attempts he can be found on a snowboard or sailboat, depending on the day. A perpetual adventurer and eternal patron of the road less traveled.
Tagged: