The story goes that “Boulder” was discovered by Anglo-Americans when gold was first discovered in Gold Hill in the fall of 1858. Chief Niwot, of the Southern Arapahoe tribe, came down to the camp on Boulder Creek, and asked the men to leave his land (oddly enough Chief Niwot spoke English! His sister had married an English speaking fur trader, and he learned it from them). They said they were just staying for the winter, and then going deep into the mountains. Of course, you can deduce what really happened.

By 1859, one hundred thousand people came to the Rocky Mountains looking for gold. The supply town of Boulder was incorporated in 1871, and the land owners were so sure that many people would want to live in Boulder, they started the prices at $1000 a plot, which was extremely expensive for the time. Many people were getting 160 acres for $5000. As many of us know buying homes in Boulder today, it is a luxury to own a home in this town, and it was 143 years ago as well.

The University of Colorado at Boulder was founded in 1877. Mary Rippon was hired in 1878 and is famous as being the first woman to be hired at a state university. She is only recently infamous for having married and mothered a child while a teacher, which was unheard of at this time. She would take sabbatical in Europe to have a baby and leave her husband and child there to return to work at CU only returning for the summers to be with them.

After the gold rush in Colorado, many people moved to the area, or only came for the summer to take in the beautiful Flatirons, hiking (in long dresses!), and riding the railroad up the mountain for picnics. The Chautauqua Amphitheater and community was founded in 1898 and became a cultural center where many teachers from Texas found nature, intellectual stimuli and play.

Health and fitness have been a foundational Boulder ethic since the beginning! Since the late 1890s there are mentions of bicycle and hiking groups, and granola is even on a menu from 1898! Boulder became an agricultural community until the mid-1950s when the Federal labs moved to town bringing with them the suburbs. 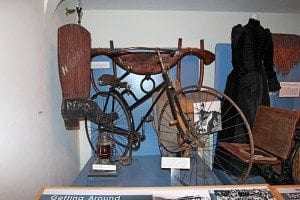 This is a brief, understated experience of my time listening to the stories of Boulder with Nancy Geyer, the CEO of the Boulder History Museum, a non-profit organization that provides this important service to our community. Currently, the museum is hosting their two-time award winning presentation of the story of Chief Niwot and the Sand Creek massacre originally put together in 2012, it has returned for an encore presentation. Along with this fantastic, in depth presentation of the Boulder’s history and the politics surrounding the creation of this awesome town I call home, are stories of present day Natives, sharing how stories of Sand Creek have been passed down and a book for visitors to comment in sharing their experience of the information.