Home › Blog › Movies › The Love That Dares Not Speak Its Name

The Love That Dares Not Speak Its Name 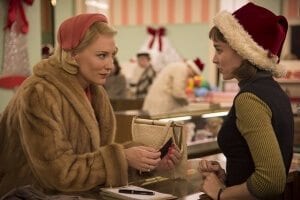 You want to know why I love film? It’s simple, really. As a straight, white guy living in the United States, there are a lot of aspects to life I can only understand from a distance. Lucky for me, to paraphrase Roger Ebert, film acts as an empathy machine. I’m allowed the opportunity to drop behind someone’s eyes and get a glimpse of how they view and are viewed by the world.

Here’s an example. One of my closest friends is a gay man. He grew up in a small, highly conservative town. He had a father that used religion as a weapon to try to keep the rest of the family in line. His father failed, of course. As a result, he was raised by a strong and canny mother who encouraged him to be himself. Easier said than done, considering the climate he was surrounded by. Think he had the option to openly flirt with, or ask out, another guy? Think again. While I understand intellectually and empathetically a sliver of what he went through, I can’t feel it in my bones, not really.

We had a momentous Supreme Court decision last year legalizing same-sex marriage. Like it or not, history is inexorably moving our country towards a place where same-sex marriage not only is legal but also a fact of life that’s not worth commenting on, due to its normalcy. For those of us who are younger, we shrug and wonder, “What’s the big deal?” But for those of us who are older, we remember the bad old days.

With his new film, Carol, director Todd Haynes has brought into focus one such relationship. It’s based on the book The Price of Salt by Patricia Highsmith.* While it doesn’t share the subject of murder, which Highsmith was fond of writing about, it does examine her other favorite theme, that of surfaces and what lies beneath them.

Therese (Rooney Mara) works at the toy counter of a department store in 1950’s Manhattan. She lives in a modest apartment. Many of her friends are men. One of them, Richard (Jake Lacy), is in love with her and wants to marry her. Richard is fine, a bit of a stiff, but he’s not what Therese is after. She doesn’t know what she wants until she does. While at work, she sees Carol (Cate Blanchett). Carol is poised, elegant, impossibly beautiful, and in a clever moment of cinematography, the camera glides past her, stops, and reverses back to settle on her. Carol approaches Therese. She has questions about a Christmas gift for her small daughter, and while their interaction is businesslike, we see the potential for more.

Carol leaves her gloves at Therese’s station. Therese journeys to Carol’s home in New Jersey to return them, and from there, the two women enter into a romance. Given that they have the misfortune to live in a less enlightened time, their initial flirtation is filled with glances that linger just a moment too long, hesitant smiles, and feather-light touches where nothing is taken for granted.

However, Carol is separating from her husband, Harge (Kyle Chandler), and they are locked in a nasty custody battle for their daughter. A lesser film would have made Harge out to be a violent brute. Here, he’s a sad man who can’t understand why his wife doesn’t love him the way she’s supposed to. When Harge begins the process to gain sole custody of their child, Carol impulsively invites Therese on a road trip. Where are they going? West.

Todd Haynes hasn’t made a feature film since his clever look at Bob Dylan in 2007’s I’m Not There. Back in 2002, his film Far From Heaven examined similar themes of repression in the Eisenhower era. It’s wonderful that he’s back. Haynes has a tremendous eye for detail, not only with his period accurate costumes and set designs, but with his shot compositions. Remember the Edward Hopper painting Nighthawks? It portrays a small group of people within a late night New York cafe, and it evokes a feeling of isolation, even within a group. A great deal of the film feels like that. Haynes shoots the majority of scenes set in New York City with muted colors, men in long coats and fedoras, gigantic gas-guzzling cars. He also repeatedly shoots Blanchett and Mara from behind wet or smudged windows, to drive home their isolation from society.

Phyllis Nagy’s screenplay is mostly solid if a little bit lacking in subtlety. Numerous blindingly obvious visual metaphors come into play. At work, Therese is confined behind a desk, unable to freely interact with others. It’s also a bit frustrating considering that Therese is the character who supplies our POV, but she has virtually no backstory.

Luckily, Rooney Mara is such a strong actor that she’s able to create her own layers for her character. Watch how she interacts with her male friends versus how she acts when she’s with Carol. She’s not just a shy girl, but a girl who’s tired of simply saying “yes” to everything. Mara is a chameleonic performer, and I have trouble sometimes believing that she’s the same person who played the feral Lisbeth Slander in The Girl With The Dragon Tattoo.

As good as she is, Blanchett’s performance is the one that’s getting most of the awards attention. It’s a tremendous, if theatrical, performance.** It’s supposed to be theatrical, given that Carol spends her life acting. She’s the doting mother, the impeccable housewife. She wears a fur coat as armor and lights her cigarette or tosses her hair back in a highly calculated fashion. It’s all to make sure the coast is clear.

A good film will tell you everything you need to know. A great film will show you. There’s a scene where Therese sits in the back of a taxi. She looks out the window and sees a man and a woman. They’re walking down the sidewalk, holding hands, without a care in the world. It’s underplayed, but Therese has a look on her face of profound loss. She can’t imagine a time or place where she could do the same with Carol in public. That moment is poignant, not just because it shows us what she wants and cannot have, but because it lets us feel it. Moments of universal connection like that can be rare, and I treasure them.

*If you’re not familiar with her, she’s primarily known for writing Strangers On a Train, and a series of novels chronicling the adventures of urbane psychopath Tom Ripley. She was a hell of a writer.

Tim Brennan
Tim has been alarmingly enthusiastic about movies ever since childhood. He grew up in Boulder and, foolishly, left Colorado to study Communications in Washington State. Making matters worse, he moved to Connecticut after meeting his too-good-for-him wife. Drawn by the Rockies and a mild climate, he triumphantly returned and settled down back in Boulder County. He's written numerous screenplays, loves hiking, and embarrassed himself in front of Samuel L. Jackson. True story.
See More Articles From Tim Brennan
Tagged: carolcate blanchettjake lacykyle chandlerpatricia highsmithphyllis nagyrooney maratodd haynes
Boulder Colorado Air Quality