Home › Blog › Movies › The Most Expensive Suicide Attempt Yet

The Most Expensive Suicide Attempt Yet 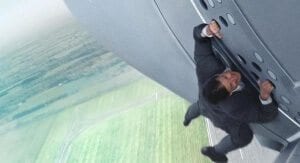 There’s this theory I’ve had for a while now. I’ve shared it with friends, but now it’s time to share it with all of you.

I believe that international superstar Tom Cruise is either a fiendishly clever performance artist, or a deeply depressed man. When he makes other films, he’s a talented and driven performer. But the Mission: Impossible movies are different. The entire point of the Mission: Impossible series is for Cruise to try to kill himself in the most wildly elaborate way possible.

Now we have Mission: Impossible-Rogue Nation. Within the first eight minutes, we see Cruise dangling precariously off the side of a plane while it’s taking off. At times, he was apparently suspended 5,000 feet in the air. We also see him driving a motorcycle at high speeds on a winding highway, and bumping his knee on the road when he goes into a turn too low. While CGI is certainly used in these movies, Cruise is undoubtedly their biggest special effect.

Cruise returns as Ethan Hunt, an agent with the Impossible Mission Force.**He’s tracking the shadowy Syndicate, an organization led by Lane (Sean Harris). Lane’s goal is to create as much chaos worldwide in order to effect change. Unfortunately for Hunt, nobody believes that the Syndicate actually exists. To make matters worse, IMF member Brandt (Jeremy Renner) is hauled before a CIA oversight committee and grilled mercilessly by CIA Director Hunley (Alec Baldwin). There’s a clever bit here where highlights from the previous four films are brought up as proof that the IMF is constantly creating international incidents.

While Hunt is used to being the smartest guy in the room, Lane is smarter. He anticipates and counters all of Hunt’s plans, forcing him to go on the run. Hunt must assemble his team of Luther (Ving Rhames) and Benji (Simon Pegg) to stop Lane. Along the way, he’s helped and hindered by Ilsa Faust (Rebecca Ferguson), an associate of Lane’s with constantly shifting loyalties.

There’s a lot that’s great about Rogue Nation, and Cruise is unquestionably the star. He’s appeared in some not wonderful films, like Far And Away and Rock Of Ages, but Cruise never gives a bad performance or phones one in.***He flings himself into the action sequences, handles drama well and continues to show he’s got a talent for comedy in his scenes with Simon Pegg. Cruise hasn’t appeared in a comedy since 2008’s Tropic Thunder, and he needs to remedy that.

His supporting cast continues to be rock solid. Simon Pegg’s Benji is fun, and he’s got some real chemistry with Cruise. It’s odd that these two characters are friends, when they probably shouldn’t be. Ving Rhames glowers his way through as Luther, the only other character to make it through all of the films. Poor Jeremy Renner, though. While he does nice work as Brandt and has some dryly funny scenes with Alec Baldwin, he’s sidelined a bit. Just like his Hawkeye in the Avengers movies and his Aaron Cross in The Bourne Legacy, Renner’s Brandt is a character that nobody much likes. Regardless, it’s nice seeing a team of people who have become friends and genuinely like each other.

But like Imperator Furiosa in Mad Max: Fury Road, Ferguson’s Faust is the breakout character. She’s just as much of a badass as Hunt is, but she’s given a much stronger character to play. In five films, all we know about Hunt is that he’s really intense, super-competent and married. That’s it. Faust is a fully fleshed-out character with her own agenda, and she’s just great. Instead of Mission Impossible: 6, I’d much prefer a solo Ilsa Faust film.

Writer/director Christoper McQuarrie has worked with Cruise for a while now, most recently in 2012’s Jack Reacher, along with co-writing the script for the criminally underseen Edge Of Tomorrow. McQuarrie is a craftsman, and he understands not only how to get the best out of his cast, but how to put together action scenes that drive the plot. Each of the action scenes in Rogue Nation is cleanly shot and has a beginning, middle and end. He’s a professional, and he’s put the film together with intelligence and care. That’s rare to see in Hollywood.

Most franchises would fizzle out after twenty years and five installments. The genius of the Mission: Impossible films is that each film is a showcase for the talents of the individual directors. Brian DePalma’s Hitchcock worship. John Woo’s sentimental bullet ballets. McQuarrie fits in as a solid pro, and I’m curious to see who steps up next.

Rogue Nation is probably the best in the series to date. Fast, smart and loads of fun. Cruise is 53, so odds are there won’t be too many more of these films in his future. If Cruise slowing down means he turns to riskier performances instead of riskier stunts, I’m all for it. And if he is depressed, will somebody give the guy a hug?

*Another bit of connective tissue you’ve certainly seen in all these films is Cruise running. Not just jogging, the guy runs like hell. Eyes wide. Teeth bared. Almost like he’s trying to intentionally cause a heart attack or a brain aneurysm.

**Every time I heard “IMF” during the movie, I briefly thought of the International Monetary Fund. That would have made for a different, but just as cool film.

***Unlike the perpetually grumpy Harrison Ford or the perpetually bored Bruce Willis. Both of these guys are good actors. They’re just not professional enough to always show up with their A game.

Tim Brennan
Tim has been alarmingly enthusiastic about movies ever since childhood. He grew up in Boulder and, foolishly, left Colorado to study Communications in Washington State. Making matters worse, he moved to Connecticut after meeting his too-good-for-him wife. Drawn by the Rockies and a mild climate, he triumphantly returned and settled down back in Boulder County. He's written numerous screenplays, loves hiking, and embarrassed himself in front of Samuel L. Jackson. True story.
See More Articles From Tim Brennan
Tagged: alec baldwinchristopher mcquarriejeremy rennermission impossible rogue nationrebecca fergusonsimon peggtom cruiseving rhames
Boulder Colorado Air Quality